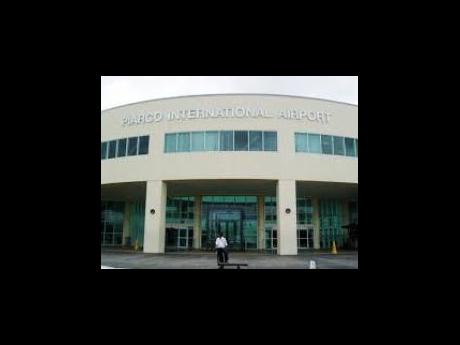 The Piarco International Airport in Trinidad where the alleged Jamaican man escaped.

The Trinidadian authorities are yet to identify the Jamaican man who they claim escaped immigration and airline security and left the Piarco International Airport yesterday.

Reports are that the alleged Jamaican national, who is said to be in his early 20s, had arrived late Friday on a Caribbean Airlines flight from Kingston. However, he was refused entry into the twin island republic.

Trinidad media report that the man has pend­ing drug-re­lat­ed mat­ters in Ja­maica and at­tempt­ed to en­ter Trinidad previously on three occasions.

When he attempted to re-enter the country on Friday, he was stopped by immigration authorities and placed in an immigration detention holding room at the airport.

How­ev­er, when im­mi­gra­tion of­fi­cers went to check on him early yesterday, he could not be found.

The Guardian reports that of­fi­cers lat­er dis­cov­ered that the man had re­moved a ceil­ing tile in the roof of the room and climbed in­side the area.

The AATT said that it was not in a po­si­tion to dis­cuss se­cu­ri­ty mea­sures be­ing put in place to pre­vent a re­cur­rence of this sit­u­a­tion.