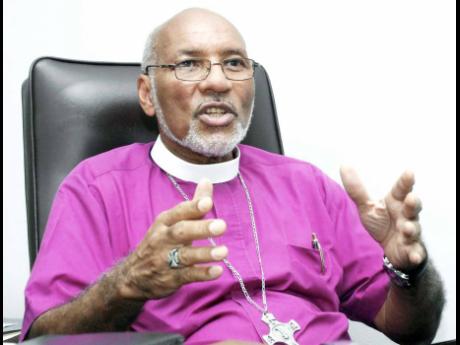 Rev Howard Gregory, newly elected archbishop of the Church in the Province of the West Indies (CPWI) and bishop of Jamaica & The Cayman Islands, received a warm welcome from clergy and lay members of the church on his return to the island last Friday ­following a week-long Provincial Synod in Trinidad and Tobago.

As Archbishop Gregory emerged from the airport terminal building, he was greeted by the sound of a church bell and was applauded by the members, several of whom hoisted congratulatory ­posters. Veteran trombonist Calvin ‘Bubbles’ Cameron rounded off the tribute with a rendition of the song You Raise Me Up.

Prior to that, the archbishop, who was accompanied by the Rev Leon Golding, Suffragan Bishop of Montego Bay, and Jacqueline Mighty, diocesan secretary, hosted a media briefing in the airport’s VIP lounge.

The Venerable Justin Nembhard, archdeacon for the Montego Bay region, who chaired the proceedings, pledged the wholehearted support of the diocese for the archbishop in his work across the Province. The CPWI comprises eight dioceses, namely: the Diocese of Barbados; Belize; Guyana; Jamaica & The Cayman Islands; Northeastern Caribbean and Aruba; The Bahamas and the Turks and Caicos Islands; Trinidad and Tobago, and the Windward Islands.

The highlights of the synod included the development of an action plan, which Archbishop Gregory said was aligned with the focus on intentional discipleship in the ministry of the Anglican Church and the lives of its members.

The challenges in engaging ­discipleship among youth in the technological age was among the areas discussed. He commended the diocese of Trinidad and Tobago, which contracted the services of consultants to assist with the design of the plan, and who will facilitate its implementation across the Province.

With respect to the ­advancement of women in the ordained ­ministry, the archbishop said delegates approved the process for the ­consecration of women as bishops.

The synod also passed a ­resolution supporting the stance adopted by CARICOM for a ­peaceful internal resolution to the social and political crisis in Venezuela, in the context of Christian hospitality. Other issues addressed included poverty and economic disparity in Caribbean society, as well as legislation on abortion and marijuana.

Archbishop Gregory identified the urgent need to create a ­stable financial framework for the 275 year-old Codrington College in Barbados as one of the critical imperatives for his administration. This is the oldest Anglican theological college in the Western Hemisphere.

The synod elected the archbishop on a majority vote, making him the 13th archbishop, primate and metropolitan of the Province. He is the first Jamaica-born ­diocesan bishop to be elected to this position.