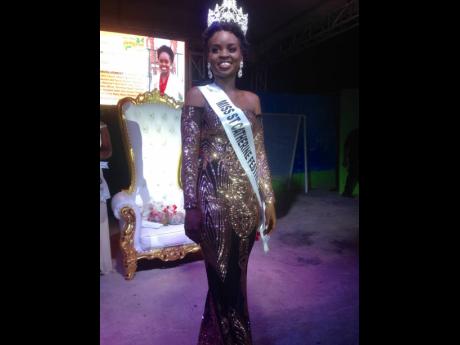 Wright, who is sponsored by Delmay Distributors Ltd, won from a field of nine contestants – three of whom are attorneys-at-law, one a law student, one with a master’s in economics, and three other tertiary-level students pursuing various first degrees. She walked away with $50,000 in prize money courtesy of Jamaica Energy Partners and a myriad of other prizes from a wide range of sponsors that supported the competition.

The first runner-up was 22-year-old Shaqkeera Douglas, a law student at The University of the West Indies, who received $30,000 courtesy of the St Catherine Municipal Corporation, while the second runner-up was 24-year-old Sherika Paul, an attorney-at-law who was awarded $20,000 from the National Housing Trust.

The talent of the contestants was on full display from the outset when they teamed up to perform a well-choreographed dance paying tribute to Jamaica’s Reggae Girlz, who are currently in France. The piece epitomised the theme of the contest – ‘Strong Jamaican Woman’. They followed up with individual cultural performances, most of which were original pieces. These were well received by the audience. The contestants then went on to impress with the fluency with which they answered the random questions that they selected.

After the competition, Wright told The Gleaner in an interview that her reaction to her victory was beyond the word ‘excitement’.

“This has been an incredible journey for me. I cannot express in words the feeling I am experiencing right now. I had to be comfortable with being uncomfortable because I had to learn things and allow myself to be moulded while challenging myself in order to be where I am now,” she said.

According to the newly crowned queen, who holds a Bachelor of Science degree in food and nutrition from the University of Technology, Jamaica, after obtaining three scholarships, including the Marcella Watson Scholarship, named after a late senior lecturer in the Department of Hotel and Tourism Management at the university, she will be challenging herself to become a private chef and a nutrition consultant.

“My community project during my reign will be geared towards nutrition. What I will do is ensure residents are served adequate meals and are aware of the right nutritional content, which I plan to impart through frequent workshops in different communities.”

Wright will go on to represent the parish in the national Festival Queen final in July.