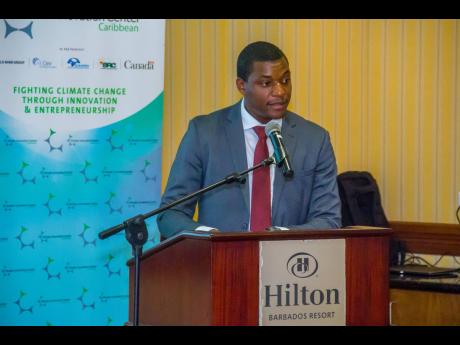 Entrepreneurs with green business ideas are being recruited to participate in a climate launch pad which will see them getting intensive training and a chance to compete for cash prizes which they can invest in their business.

The event is being organised by the Caribbean Climate Innovation Center (CCIC) with funding from the Inter-American Development Bank (IDB). The programme is part of the entrepreneurship offerings by EIT Climate-KIC, the European Union’s innovation program for climate change.

Chief executive officer of CCIC, Carlinton Burrell, said while they generally host boot camps in countries in the region, the launch pad is being hosted for the first time this year. The application period was opened on May 1 and ends June 10.

“The focus is on green ideas [and] green business in adaptation and mitigation. So we are looking for persons to come up with green ideas, any idea that is climate-smart and friendly,” he said.

“Once they have such ideas in any of the sectors, whether it is industry, technology, agriculture, water, renewable energy, transportation, waste management and so forth, they can put forth this idea. A number of participants will be selected based on their idea. So if we have, say, 30 or 50 applicants submitting their ideas, we are going to look at maybe 10 to 15 of these ideas,” Burrell said.

The competition seeks to unlock potentials to address climate change, creating a stage for those ideas to grow into global businesses. Barbados and Suriname are the two other regional countries participating in the competition.

Selected participants will start their rigorous training with an intensive two-day boot camp from June 21 to 22 at The University of the West Indies, Mona campus. The boot camp will be followed by intensive coaching sessions, leading up to a national final on June 30. The top two of all competing countries will battle the global grand final in November 2019, which will be hosted in the Netherlands. The world’s top 10 best ideas will win access to a regional accelerator programme. The overall winner of the global grand final also receives a cash prize of €10,000, the runner-up gets €5,000, and the team that secures third place wins €2,500.

“The trainer will be coming from Switzerland as well, who will be conducting the training over the two days; working with local coaches and mentors, of course then those participants will go on to participating in a six-week mentorship and coaching over that time period to prepare them for a national finals,” Burrell explained.

The national finalist will go to Netherlands to participate in the global grand finals.

“We want the best of the best to represent Jamaica in Netherlands for the global grand finals,” Burrell said.

The CCIC will also be hosting an official launch ceremony on June 19 at The Knutsford Court Hotel.

The CCIC was established in 2013 by the World Bank with funding from the government of Canada and with administrative and technical support from the Scientific Research Council in Jamaica and the Caribbean Industrial Research Institute in Trinidad. The focus of the organisation is to identify and support Caribbean entrepreneurs and new ventures that are developing locally appropriate solutions to climate change mitigation and adaptation, thereby providing an small and medium enterprise-driven approach to solving climate, energy and resource challenges in the region.

Burrell is pleased that more and more entrepreneurs are creating green businesses.

“We have persons coming into our offices indicating what their ideas are and asking us how we can help and facilitate them. So we are really working with them to drive the innovation,” he said.

“This will definitely contribute to economic development in terms of job creation, because these entrepreneurs are now moving to commercialisation,” he added.