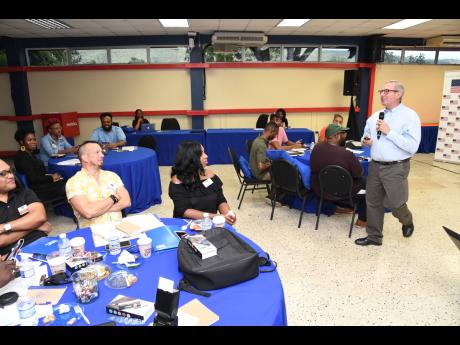 Contributed
Journalism professor at the University of Nevada, Alan Deutschman, addresses journalists during a workshop organised by local tech company, MC Systems, last Saturday. The event was held at the Caribbean School of Media and Communication (CARIMAC) at The University of the West Indies, Mona.

A United States journalism professor is urging local media practitioners to find creative ways to obtain information when probing powerful companies or organisations that may try to thwart the publication of stories critical of them.

Journalism professor at the University of Nevada, Reno, in the United States, Alan Deutschman, said negotiating access could be a challenge for journalists, especially if these entities control technology.

Responding to questions at a technology reporting workshop last Saturday at the Caribbean School of Media and Communication (CARIMAC) at The University of the West Indies, Mona, the well-established author and journalist of 31 years noted that digital technology controlled by a few could concentrate “power” in the hands of a small number of persons.

Relating the behind-the-scenes battles in publishing his book, The Second Coming of Steve Jobs – which was critical of the Apple founder – Deutschman said that to get the story, he had to find ways around an uncooperative Jobs, who even tried to stop the publication of the book.

“I still managed to interview 100 persons: former employees of his company, long-time friends, colleagues, competitors in his industry, but many of the people I approached wouldn’t cooperate. It took that much more tenacity, persistence, perseverance and struggle as well as time to get the number of knowledgeable sources that I really needed to get the story,” he recounted.

He said interviewing other sources before seeking a response from the company or person at the heart of the story could prove a useful strategy.

Deutschman warned journalists against trading favourable coverage for access to powerful companies or individual persons. He said the concept, known in media and communication as access journalism, undermines the principles of responsible journalism.

“I love to have the access, I love to have long interviews with the people running powerful companies, but I’m not willing trade that for positive coverage. I am going to do independent, often sceptical, coverage, and if people won’t talk to me afterwards, then I will still get the story,” he affirmed.

He urged reporters to generate their own stories and not rely on releases from companies and individuals.

“If you are going to rely on those handouts, you’re going to lose. It’s a race to the bottom,” he warned.

The workshop was organised by MC Systems, in collaboration with the US Embassy and CARIMAC, and was endorsed by the Press Association of Jamaica.