St Christopher’s School for the Deaf gets new classrooms 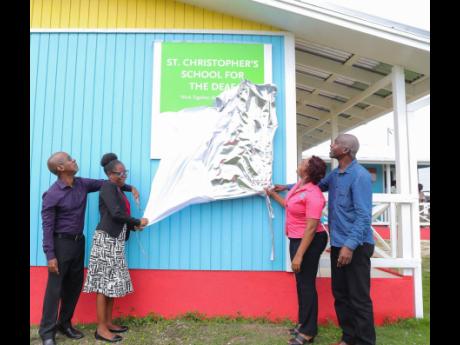 The Sagicor Foundation on Friday officially commissioned into use a new block of classrooms at the St Christopher’s School for the Deaf in Brown’s Town, St Ann, developed through proceeds from the 2018 Sagicor Sigma Corporate Run. The new building was constructed in collaboration with Food For The Poor Jamaica.

In addition to the provision of the new block – which includes three classrooms, an office and a bathroom – the foundation also carried out infrastructural upgrades, with repairs being done to the roof and ceilings of classrooms and dormitories, as well the installation of a play area, totalling a contribution of $12 million to the 100-year-old institution.

Principal Donna Harris expressed gratitude to the Sagicor Foundation for having selected the school as a recipient of the Sagicor Sigma Corporate Run and to Food For The Poor for coming on board. She noted that the new building is particularly valuable as its location and design on the school compound afford greater accessibility and will facilitate easier communication with students in case of an emergency.

“We longed for a building such as this, where our deaf students could be in an open space where they could see and thus be more aware of what was happening around them,” she said, adding: “I want to express hearty gratitude, most of all, for the love and commitment expressed to our school in carrying out such a meaningful and big task.”

Chairman of the school board, Donovan Johnson, meanwhile, gave compliments for the quality of the work carried out and committed to ensuring that the building is used to enhance education delivery to the students and help them achieve their potential.

“People will always remember how you made them feel, and certainly, Sagicor and Food For The Poor have made us feel very satisfied. This is a sturdy building, and all the work done shows the effort, consideration and thought put into it,” he said.

The Sagicor Sigma Corporate Run raised a total of $50 million in 2018. In April, the foundation handed over specialised medical equipment valued at $25 million to the Spanish Town Hospital Neonatal Intensive Care Unit, as well as $5 million towards the maintenance of the equipment. An additional $2 million was donated to the SOS Children’s Village from the proceeds.

The Sagicor Sigma Corporate Run has raised over $400 million in proceeds for health- and child-related charities and organisations over the past 21 years, including this year’s historic raise of over $52.4 million. The proceeds from the 2019 run will assist May Pen Hospital’s Neonatal Intensive Care Unit, the Lupus Foundation of Jamaica, and the Diabetes Association of Jamaica.