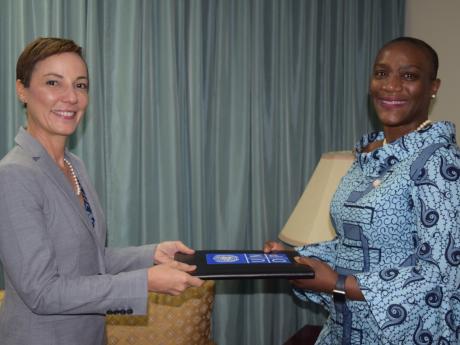 Jamaica has a new resident representative from the United Nations Development Programme (UNDP).

She is Denise E. Antonio, an American and a native of the west African country  Liberia.

In welcoming the new Resident Representative, Johnson Smith said the cooperation between the government of Jamaica and UNDP has been deep and substantial, and expressed optimism that Antonio’s appointment would sustain and enhance this enduring partnership.

Antonio, in her first official remarks since taking up appointment, reiterated UNDP’s commitment to supporting the government and people of Jamaica realise their development aspirations.

She said UNDP was looking to support productivity and inclusion of all people in pursuit of economic growth and sustainable development.

* She also served as Peacekeeping Accounts Officer with the United Nations in New York (2000-2005) and as Financial Systems Specialist with UNFPA (1998-2000).

* Before joining the United Nations, she held various positions of increasing responsibility in the USA as Controller at ScreenVision Cinema Network (1998); Controller at International herald Tribune (1995-1996); Senior Internal Auditor at The New York Times Company (1990-1995), and Auditor at New York Life Insurance Company (1998-1990).

* Ms. Antonio is a Certified Public Accountant in New York State and a graduate of Business Administration in Accounting from Adelphi University.

* She is married to Kisseih-Tetteh Antonio from Ghana and is a mother of five children – three boys and two girls.

The new Resident Representative took up her new assignment on May 16, 2019.