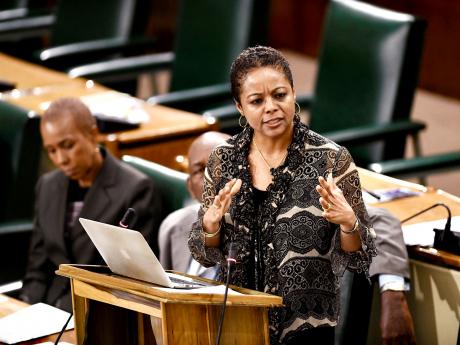 It appears that Attorney General Marlene Malahoo Forte is not in support of the Government's consideration to legalise obeah in Jamaica.

Obeah is a cultural ritual carried out by some people deemed to have extraordinary powers to influence certain outcomes.

In Parliament on Tuesday, just as lawmakers were getting ready to push the maximum fine from $100 to $1 million for anyone found guilty of practising obeah, Justice Minister Delroy Chuck signalled that the quasi-religious ritual could soon become legal.

He said already he has instructed the Law Reform Department to craft another submission for him to take to Cabinet to have the 1898 Obeah Act repealed.

Malahoo Forte later took to Twitter "confessing" how awkward and uncomfortable she felt in the House of Parliament when she heard some of the utterances about the practice of obeah.

"Let's be honest: here in Jamaica obeah has always been known to a tool of the darkest form of evil that does nothing but harm to others," she tweeted.

But the cause of Malahoo Forte's pain is the source of pleasure for noted businessman and cultural enthusiast Wayne Chen.

He described the 1898 Obeah Act as a discriminatory colonial anachronism that favours European belief systems over all others, saying it should be repealed.

The Law Reform (Amendment of Penalties) Act would have increased the fine for persons convicted of practising obeah but on Tuesday, the legislation was amended to exclude the Obeah Act because of the plan to repeal it.

A Cabinet submission for the repeal of the 121-year-old Obeah Act was submitted 44 years ago in 1975, but was abandoned.

There have been overwhelming reactions on Twitter about the possibility that the Obeah Act will be repealed.

@Sherlock095: Jamaica can’t be a real place. Imagine legalising the open practice of witchcraft. Marijuana would like to have a word.

@Delroychuckjm: Amazing how strong so-called sensible people despise the beliefs and culture of others, however foolish and ridiculous these practices may be considered. Actually, I think the Obeah Act could be challenged as it may infringe the Freedom of Religion provision.

@kevtothec: Do we realise that the Obeah Act has little to do with witchcraft and more to do with white supremacy? The fact that the church is trying to reframe it shows just how tone deaf they are.

@geraldlindo: If it wasn’t for obeah and its cousins, there would have been no Morant Bay rebellion. There might not have been a Haitian revolution either.

@RebelleDon: I can’t believe the Government is really having a conversation about legalising Obeah. God forbid if we sink like Port Royal back in the days.

@LadyJade56: Until Jamaicans fully understand African religions in Jamaica, we will always have this sort of uproar when it comes to obeah. I say repeal it. Never understood why it was there in the first place and how it was held up in courts.

@NikkiM81743195: Anything encouraging the dark side is unacceptable in a modern society. Obeah is not a religion but a cult.