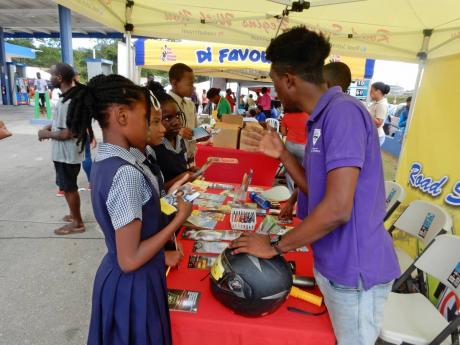 Up to Tuesday, there were 186 road fatalities since the start of the year, up from the 2018 mark of 153 deaths over the corresponding period.

The launch took place at the Fesco service station, main sponsor of the event, under the theme ‘Road Safety for Life’.

Chairman of the JGRA’s road safety committee, Bobby Hammond, said that driver civility must be vigorously promoted if road deaths are to trend downwards.

“Unfortunately, we are a country with a lot of indiscipline, selfishness, intolerance, and those are contributing factors to the incivility and the way we handle ourselves as a nation,” Hammond told The Gleaner at the launch.

He added: “With all of those, you’re going to expect that driving on the road and activities that are associated with uncivilised behaviour will become a reality. Firstly, I think we need to start to educate our people to be civilised and to behave in such manner.

“Civics is to be reintroduced in all schools, from kindergarten right up. There are so many things that we do as a people that are so detrimental without being proactive and intelligent and to look at life for what it’s worth. I think education and civility need to be improved.”

“It’s not new, but it works in other jurisdictions, and it’s the safe-systems approach. This approach embraces all factors of road safety. That means safer drivers, safer roads, safer vehicles, and safer speeds,” Chung pointed out.

“Humans are not perfect. We make mistakes and we will have crashes, but the four pieces work together. They provide the chance that when you crash, you have a chance to survive.”

Chung said that road conditions also need to be improved. This includes better road surfaces and the trimming of low-hanging branches from trees near the road, referencing a recent death in Ocho Rios after a tree branch fell on a motor car.

“There are things out there that we can do, and we need to make a start in this approach because in other jurisdictions, like Netherlands and Sweden, they’ve reduced their fatalities by 50 per cent, and that’s huge, so we don’t have to reinvent the wheel. We just need to follow this international best practice and get started.”

Superintendent Lansford Salmon, who deputised for ACP Calvin Allen, head of the Public Safety and Traffic Enforcement Branch of the Jamaica Constabulary Force, thanked the JGRA for its continued efforts to make roads safer.

Salmon said, however, that Jamaican roads need to be safer as the current traffic figures were “far, far too much”.

The police superintendent singled out motorcyclists as the main problem for the rise in traffic deaths this year, with the sector responsible for 35 per cent of road fatalities.