'I feared for my life', says ex-cop after being pepper-sprayed by constable 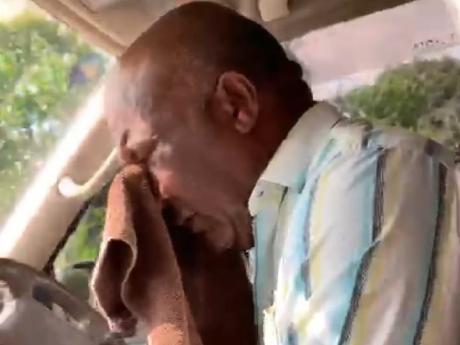 Retired deputy superintendent of police Altemorth 'Parro' Campbell has detailed his harrowing pepper-spraying by a constable during a traffic stop on Wednesday, saying during the incident he became fearful for his life and that of his son.

Campbell, a retired crime fighter with 40 years and seven months' service in the Jamaica Constabulary Force (JCF) was stopped on Molynes Road near the Waltham Park Road intersection, allegedly for a traffic violation.

The constable demanded his driver's licence and Campbell replied saying he did not have it.

The ex-cop was then ordered by the constable to step out of the vehicle and when Campbell refused, he was pepper-sprayed.

"It was the worst experience ever," Campbell told RJR's Emily Shields on the talk show programme Hotline this morning.

"I was blind for an hour," he said, adding that he was overcome by fear but had to remain composed especially since his son was in the car.

Campbell also said, because he felt threatened by the cop he decided against coming out of the vehicle.

He said his son, who was seated in the front of the vehicle and who recorded the incident, has been traumatised and was also affected by the pepper-spray.

"He's an asthmatic person," Campbell said, adding that the child has not been doing well but had to sit an exam a day after the ordeal.

"You can just imagine my position as a father?" he questioned.

Meanwhile, Campbell said the incident was regrettable but he understands that it was an extension of the problem of society.

"The society is like a swamp and we're looking for the cleanest dirty one to be a police, to be a soldier etc," said Campbell.

He has so far visited a doctor and will be seeing a specialist soon.

The retired crime fighter said he will today provide a statement to the Inspectorate of the Constabulary and he has learned that the Independent Commission of Investigations has also interest in the matter.

But what happened in the first place?

Campbell said he was stopped some time after overtaking a stationary vehicle and another that was making a left turn near Tarrant Drive on Molynes Road.

He said the constable told him that he had committed a traffic violation and he disagreed.

The police inspectorate has only said a probe has been launched.

Amos said from his observation, several JCF policies were breached.

Among them, the attire guideline, the use of force and public interaction policies.

Driving Without Permit or Driver’s License

3. Every holder of a permit or driver's license who is —

shall have the permit or license in the motor vehicle and on being so required by a constable in uniform or who shows his identifying documents as a constable, produce his permit or driver’s license, or such other document constituting evidence thereof for examination by the constable.