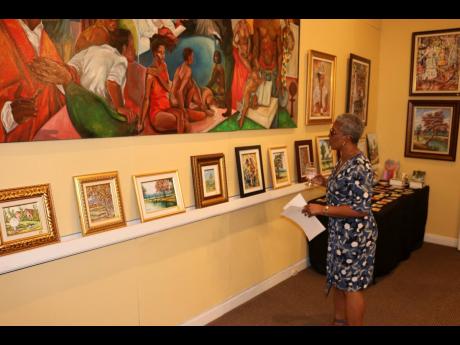 The exhibit, with just under 100 pieces of art on display, was opened by Jamaica’s ambassador to the United States, Audrey Marks, in the presence of a large gathering of Jamaican and other Caribbean art connoisseurs and enthusiasts.

The oil-on-canvas and print pieces, which are all on sale, depict poignant slices of Jamaican life, including from urban and rural landscapes, human forms, and still-life items, as well as abstract images.

Both Morgan and Blackwood, who hail from western Jamaica, were present at the opening. They are founding members of the acclaimed Trafalgar Artists Group of Jamaica and boast a solid international following.

Their works, which have been on exhibition at the embassy on previous occasions, have been acquired both locally and internationally, with collectors including King’s House; heads of government, including in Latin America; corporate institutions; and well-known entertainers and academicians.

In welcoming the artists and well-wishers to the embassy, Ambassador Marks noted that the collection helped to bring beauty, joy and tranquility to the Jamaican diplomatic premises while showcasing Jamaican talent of the highest quality.

In commenting on the exhibition, artist Paul Blackwood said, “We have been showing our art in D.C. since the tenure of Ambassador Keith Johnson in 1991. Since then, we have shown with every successive ambassador.”

“We have built a tradition of trust with the people, in particular the Caribbean diaspora in the surrounding areas, and we know that they look forward to seeing the richness of Jamaican culture through the art, and so we endeavour not to disappoint.”

The exhibition ends on June 26.