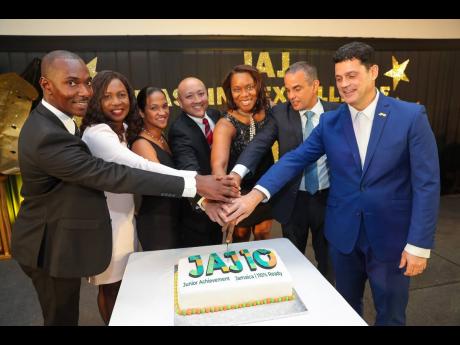 Contributed
Members of the board of Junior Achievement Jamaica celebrate a proud moment as they cut the 10th-anniversary cake of the organisation. From left are Chaluk Richards of GK General Insurance Company Limited; Deloris Jones of JN Fund Managers Limited; Caribbean Broilers’ Alicia Bogues and Matthew Lyn; Alphie Mullings-Aiken of JA Jamaica; Paul Lalor of the Insurance Company of the West Indies; and Emanuel DaRosa of the Jamaica Public Service Company Limited.

Local non-profit Junior Achievement (JA) Jamaica is celebrating 10 years in the development of Jamaica’s youth this year. The organisation, which focuses on education in the areas of entrepreneurship, financial literacy, and workforce readiness, announced the launch of its 10th-anniversary celebrations at their annual awards banquet held at the Spanish Court Hotel in, New Kingston recently.

Speaking at the event, Paul Lalor, chairman of JA Jamaica, was pleased to announce the organisation’s plans for reaching 100,000 youth by the end of 2020. “We are proud of all our accomplishments thus far. We are happy to see how talented and innovative our youth are, and we thank everyone for their support of JA Jamaica over the years,” Lalor said.

While celebrating the organisation’s success, he highlighted that the high quality of JA Jamaica’s programme is associated with a high cost for execution. “Although it takes a lot (of money) to deliver the programmes that JA Jamaica does every day across the island, it is the most measurable in terms of direct return on investment for every dollar invested by an organisation,” Lalor added.

JA Jamaica will be celebrating its anniversary under the theme ‘110 per cent’ ready. The organisation’s president, Alphie Mullings-Aiken, stated that while their parent organisation, Junior Achievement Worldwide, turns 100 this year, the local arm turns 10.

JA Jamaica believes they are 110 per cent with the global best practices shared with their partners to empower each Jamaican youth to own their economic success.

“JA Jamaica has evolved. We are no longer a staff of one, but a major player in a family of shapers in the education, economic and entrepreneurship ecosystem in Jamaica and the Caribbean,” Mullings-Aiken said.

“We are expanding significantly, and over the years we have accomplished a lot, including the establishment of JA BizTown – that includes a physical location for an experiential economic learning simulation for grade-five students,” she added.

Among the accomplishments of JA Jamaica is a major partnership with the Ministry of Education, Youth and Information, which has seen the inclusion of the organisation’s Junior Achievement Company of Entrepreneurship Programme, in the National Standards Curriculum. This programme, will increase from 77 to all high schools, commencing in September, and will continue to teach students how to start and run businesses.

In launching the 10th anniversary celebrations, Lalor announced that JA Jamaica has plans for continued expansion islandwide and invites companies and individuals to continue their support.

“We truly believe that when we see you in another year, we will be even more ready as the board and staff of JA Jamaica continue to work to impact the lives of youth across the country,” he said.

At the awards banquet, 40 companies and individuals, including a top teacher per parish, were honoured for their significant contribution to the organisation during the 2018/2019 academic year.