It was a 'running gunbattle'...police give details about HWT incident in which five persons were shot 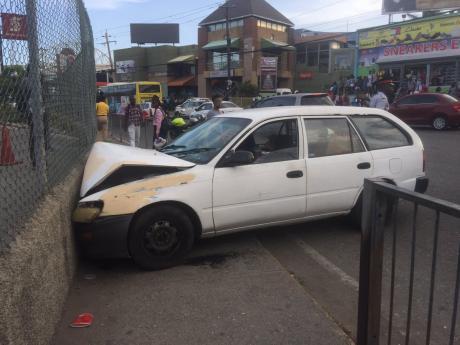 A car crashed into a wall on Constant Spring Road in Half-Way Tree, St Andrew. It is reported that the driver was injured in the shooting yesterday.

The police have released details about the incident that sent scores of persons scampering for cover in Half Way Tree last evening, saying it was a “running gun-battle” between two men.

When the dust cleared, according to police reports, one person was killed and four others injured.

The name of the deceased has not been released.

A firearm was also seized in the incident, the police said.

The police Corporate Communication Unit (CCU) said, in a statement today, that a man suspected of being involved in the gunfight is in custody while the other remains at large.

According to CCU, the shooting started around 5p.m. at a plaza on Constant Spring Road and continued onto Courtney Walsh Drive.

It’s reported that an off-duty policeman and another cop saw the incident, intervened and apprehended one of the assailants.

A firearm was reportedly taken from him.

The injured persons are being treated at hospital.