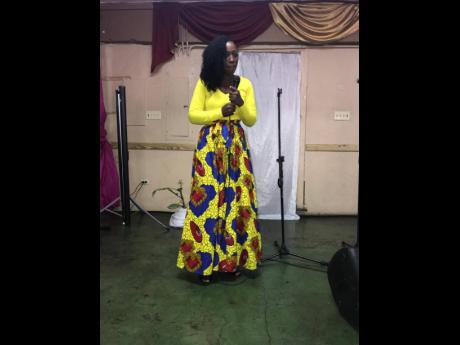 The discovery that many churches today are lacking what is known as the ‘deliverance ministry’ led Prophetess Shanika Sutton to host her first of such free conferences.

The prophetic and deliverance gathering which took place last Saturday (June 1) in Cross Roads, Kingston, saw many hopeful persons filling out the small room with their minds set on claiming their breakthrough and becoming whole again.

“The aim of the conference was to break curses; reverse the plans of the enemy; set people free from demonic bondage; expose the hand of witchcraft; and deliver people through the power of Christ.

“I find that many churches don’t incorporate the prophetic and deliverance ministry in their regular church programme. For example, many people attend their regular congregation, bound by witchcraft, generational curses, demonic influences, but end up leaving the same way.

“The programmes tend to not facilitate these ministries,” Sutton said, adding that she therefore hoped to provide this opportunity, freely, to those who were in need of deliverance.

Sutton, who is known for her many supernatural sessions on social media, told Family & Religion that the prophetic ministry is also lacking and often overlooked in traditional church setting.

“The prophetic reveals the enemy’s plans, what most people can’t see in the spirit realm and gives directions for the future. The prophetic and deliverance ministry go hand-in-hand.

“The prophetic reveals the plans of God, but the deliverance ministry removes and casts out the demon hindering the manifestation of God’s plan. Many people are struggling, but they don’t know how to expose the demonic stronghold behind their struggles.

“For example, at the conference, the Lord revealed to me that a lady was struggling because of a generational curse that hinders growth and prosperity in her family. I saw prophetically that in her family some were maids because they couldn’t get a better job; they lacked financially and they haven’t moved on educationally. She confirmed that her sister and mother are both maids, and that neither of them, also herself, have been able to secure higher education. She explained that she can hardly meet her bills and there was a spiritual fight against her business. At that point, it was revealed that she was a victim of generational curses. We prayed for her deliverance right there,” the prophetess shared.

She noted that her colleague and co-minister for the day, Pastor Johnathan Whyte, also prophesied and conducted deliverance.

“During his session, a lady manifested a demon that openly admitted he was sent to make her ‘mad’. It was a spirit of mental illness and it was sent to ruin her life. Other spirits manifested; however, people were delivered and demons were cast out.

“Therefore, the conference provided the opportunity for people who needed deliverance, a prophetic word and those who simply needed to understand what is fuelling their struggles.

“Oftentimes, a demon is behind our chaos and struggles and most persons are not afforded the opportunity for deliverance in their congregations,” she said, adding that the conference provided an opportunity for those who wanted to be freed. Sutton revealed her plans to host more of such conferences before the year ends and also in different parishes.

According to her, “It will be advertised as time goes by. My aim is to teach and expose the nation to the prophetic and deliverance ministry. With this, people will understand how to pray deliverance prayers, how to expose demons, how to pray towards their prophetic word, and how to expel demons behind their struggles.”