Visually-impaired cop among 29 promoted to Inspector 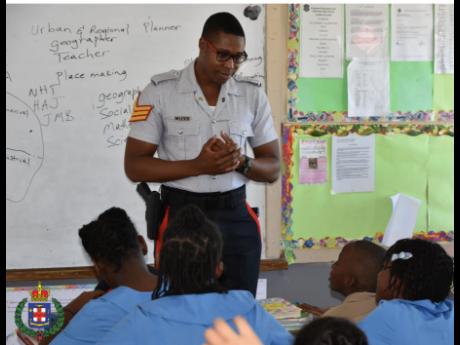 Newly-promoted Inspector Shaunjaye Mitchell addresses a group of students in this undated photo.

Police Sergeant Rohan Brown, who is visually-impaired, is among 29 members of the Jamaica Constabulary Force (JCF) who have been promoted to the rank of Inspector.

The list also includes Sergeant Shaunjaye Mitchell, who is assigned to the JCF’s Corporate Communications Unit (CCU) and is the face of several public education campaign undertaken by the JCF.

Brown, who is assigned to the Portland Division, continues to serve his community though despite his disability, CCU noted in a statement announcing the promotions.

The issue of promotion has been a sore point among rank-and-file members of the force.

According to CCU, 15 of the newly-minted Inspectors are from the investigative arm of various divisions and formations.

In addition, St Catherine South, Portland, Manchester and the Counter-Terrorism and Organised Crime divisions, along with the National Intelligence Bureau each had three members promoted.

St Andrew South and the Major Investigation divisions each saw two of their members being promoted.

The Police High Command, in congratulating the newly-promoted cops, praised them for their “dedicated service to the people of Jamaica”.