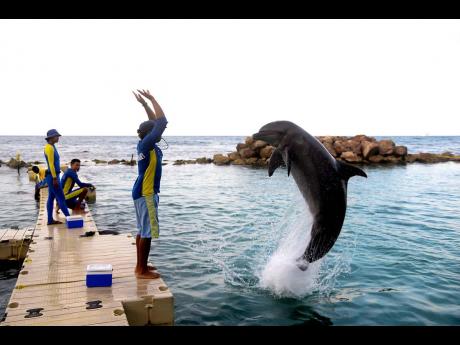 Gladstone Taylor
An employee of Dolphin Cove goes through a practice routine with a dolphin at the flagship marine park in Ocho Rios, St Ann. Dolphin Cove plans to set up a similar facility in Discovery Bay, further west in the parish.

The court’s decision to deny the application for an extension of time to apply for judicial review has dealt a heavy blow to stakeholders in Discovery Bay, St Ann, who since last year had raised grave concerns about the creation of a dolphinarium in the area by Dolphin Cove Limited.

Supreme Court judge, Justice Leighton Pusey, who made the ruling, refused the application because he found that there was no compelling reason to extend the time and it would cause substantial hardship to Dolphin Cove Limited and be detrimental to good administration.

He also said that the court believed that there would be no reasonable prospect of success in application for judicial review.

The applicants – property owners Erica Downer, John Greaves and Jennifer Greaves and community organisations, the Discovery Bay Community Development Committee and Alloa Fishermen Co-operative Society Limited – had argued that the establishment of the facility in the bay would have adverse effects on the marine environment.

Their lobby was prompted by the posting of a notice at the Puerto Seco Beach in April 2018 that a dolphinarium – an aquarium or pen at open sea for dolphins – would be developed in the area.

They said that the establishment of the dolphinarium would negatively affect the properties in the immediate area by the waste the dolphins produce, also presenting unpleasant effects for swimmers.

The stakeholders also cited the existence of the fish sanctuary in the waters of Discovery Bay that has seen an improvement in the fish stock benefiting fishermen in the area.

About a month after the notice, the concerned stakeholders had taken to the streets in May 2018 protesting against the establishment of the facility. They also demonstrated outside Jamaica’s Parliament building in Kingston in March this year.

Objections were raised at a meeting with Dolphin Cove Limited in June 2018.

Despite this, the Government approved licences on September 18, 2018, which were issued on October 3, 2018.

In opposition to the licences, the stakeholders said they engaged with government agencies and started an online petition which, they said, was presented to Prime Minister Andrew Holness on October 31 last year.

The Discovery Bay lobbyists said they were of the view that the issues they raised would be resolved without litigation, arguing that the environmental agencies involved should have ultimately conducted an environmental impact assessment (EIA).

In an affidavit, coordinator of the Ecosystems Management Branch of NEPA, Gabrielle-Jae Watson, indicated that there was extensive consultation with the Ministry of Industry, Commerce, Agriculture and Fisheries, which said it had no concerns with the establishment of the facility.

The process was further outlined in an affidavit by NEPA CEO Peter Knight.

In his analysis, Justice Pusey said it was not mandatory for an EIA to be conducted and that the only consultation required was with other government agencies, which he said was done.

The judge cited the Civil Procedure Rules, which dictates that applications for judicial review ought to be “made promptly and in any event within three months from the date when grounds for the application first arose”. He said the discretion to extend time ought to be exercised when there is good reason for doing so.

Justice Pusey said that the application for judicial review was made on April 2, 2019, six months after the permits and licence were granted and nearly a year after the initial demonstration was staged.

He said the applicants argued that the delay between the granting of the permit and the licence and the making of this application arose because they had been contacting government officials and working on an online petition.

Denying the extension, Justice Pusey said that applicants ought to act quickly.

He further said that confidence that non-judicial remedies will be effective is not a reasonable excuse for delay to apply for judicial review.