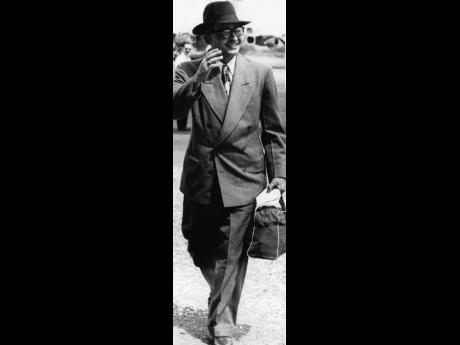 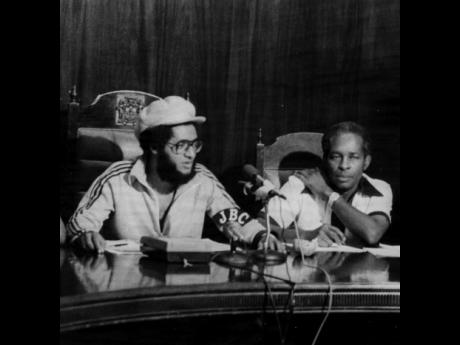 Junior Dowie
In this 1980 Gleaner file photo, Dr D.K. Duncan (left), then general secretary of the PNP, speaking at a Jamaica House press conference about the death of PNP candidate Roy McGann. Looking on is Anthony Spaulding, minister of construction. Duncan accused the police of “atrocious lies” in relation to the McGann’s death.
1
2

The dishonourable title ‘Father of Political Violence’ has been foisted on Edward Seaga and has gained credibility to the extent that he has never forcefully rejected it. He naively believed that Jamaicans would know well enough to dismiss this calumny for the political chaff that it is and as a result has been thoroughly demonised.

In the history of our popularly elected governments, there have been two peaks in political violence: 1947-1949 and again 1976-1980. It is from an examination of these two peaks and the intervening valleys that we shall be able to determine who is the real Father of Political Violence and the use of guns in political conflict.

It is widely believed by Jamaicans that political violence, particularly involving the use of guns, had its genesis in the 1962 electoral conflict in West Kingston between Edward Seaga (JLP) and Dudley Thompson (PNP). The truth is that political violence had always existed in the body politic, even in the days of Legislative Council in the late 19th century, when groups supporting rival candidates fought each other with ‘kookoomacca’ sticks.

With the organisation of mass parties after 1938, the groups of political ruffians grew larger, and to the arsenal of sticks were added bottles and stones. The turning point in political violence came in 1947 when Wills O. Isaacs, vice-president of the PNP, introduced the most dangerous element, the highly organised political gangs whose purpose was to transform inner-city constituencies into garrisons and drive all political opposition from the streets.

When JLP Controlled The Streets

The PNP was founded in September 1938 on a middle-class base. The JLP was founded in 1943 on a working-class base, and its supporters had a clear majority in numbers and in ruffian support. The JLP ruffians, on their own initiative, began to attack PNP meetings with bottles and stones, and anyone showing up in the inner city wearing the red shirt of the PNP was liable to be set upon. PNP supporters cowered in fear of the JLP badmen until Ken Hill organised the first resistance that repelled an attack on a meeting in Rose Town in the lead-up to the 1947 local government elections. After running battles that lasted into the wee hours of the morning, there were no deaths, just bruises, cuts and a few bandaged heads.

But the whole character of political violence changed with the intervention of PNP Vice-president Wills O. Isaacs, who brought to it a cynicism that had never been seen before and turned the Corporate Area constituencies into PNP garrisons. Isaacs thereafter maintained a dominance by violence that was not broken until 1980 when the JLP, for the first time in 31 years, won majority control of the Corporate Area with eight of 15 constituencies and created the balance of forces that makes relative peace possible.

In 1947, Isaacs organised his paramilitary forces. The most infamous one was mobilised out of 69 Matthews Lane and took the street address for its name, Number 69. It was led by badmen named Gorman and Porteous and they made the PNP feared all over the Corporate Area. Apart from Number 69, there was Resistance in Western St Andrew, with Pioneers and Underprivileged.

In all the violence wrought by Number 69, the most infamous was the Gordon Town Riot of 1949 when Isaacs trucked gang members into Eastern St Andrew to assault JLP supporters in an August parish council by-election between Allan Isaacs (PNP) and Leo McDonald (JLP). The JLP supporters were defenceless in the assault by Number 69. Many of them were injured and JLP area leader, Benjamin Taylor, was beaten to death.

The November 1949 enquiry conducted by Chief Justice Sir Hector Hearne found the JLP blameless in the riot, but found Isaacs responsible by reason of his “prancing, posturing and rabble-rousing”. When called upon to account for his conduct, Isaacs responded, “What are a few broken skulls in the birth of a nation?”

The Gordon Town Riot marked a peak in political violence that would never be reached again until the years between 1976 and1980. The political conflict in 1962 and 1966 was focused on West Kingston as the directors of violence in the PNP fought tooth and nail to prevent Edward Seaga from winning the seat.

For one thing, they could not bear the thought of the JLP winning an additional seat in the inner city after Clem Tavares had made the first breach in South West St Andrew in 1959. For another, they wanted to drive Seaga out of politics because they held him responsible for dimming the lights on Norman Manley’s career with the ‘Haves and Have-nots’ debate and the referendum defeat. Norman Manley after all was second only to God and Seaga was just a “hurry-come-up Syrian bwoy”. Seaga won in 1962 and again in 1966, but the PNP pressure never let up, and when they couldn’t beat him, they decided that they would demonise him as the Father of Political Violence.

The violence between 1976 and 1980 was diabolical – it was the death struggle of failing socialism and for the first time the ruling party used the power of the State in pursuit of partisan objectives in the 1976 emergency. It also employed the Reichstag (Nazi Germany) tactic of blaming the victims for the work of their attackers in incidents like the May 1976 Orange Lane Fire. After that, there were the Green Bay Murders, The Gold Street Massacre, the Gunfight in Gordon Town, and The Top Hill Tragedy.

Anthony Spaulding, the PNP MP for South St Andrew, wanted to demolish a wooden tenement on Orange Lane that housed 500 people. The demolition would clear a pocket of JLP support from his constituency and provide a site for new housing construction. PNP supporters were trucked away in the middle of May, but the JLP backers who remained were burned out in a horrid fire on May 19 that left eight adults and two children dead and nearly 500 tenants homeless.

The Green Bay Murders of January 1978 were a conspiracy between a highly placed official in the PNP government and a highly placed officer in the Jamaica Defence Force to implicate the JLP in the illegal importation of guns. An approach was made to 10 young men from the JLP stronghold of Southside to offer them highly paid jobs to protect shipments of weed. They were taken in a JDF ambulance to the army’s firing range at Green Bay and shot at like pigeons. A number of the men escaped to tell the tale and the whole sordid story came out in a commission of enquiry that clearly showed where the responsibility lay. Still, the commission found that no one was criminally responsible for the murders.

On the night of April 20, 1980, gunmen dressed in black fatigues opened fire on a dance where JLP supporters were congregated, killing eight and injuring three. This attack happened six days after a large crowd, remembering the Green Bay Murders, had prevented Michael Manley from touring Southside. The operation was conducted with a military precision that reminded Colin Dennis (The Road Not Taken ) of tactics taught in the Brigadista programme conducted in Cuba to train Jamaican youth in construction skills. The funeral for four of the dead became a huge anti-government demonstration.

On the night of nomination day for the 1980 general election, Roy McGann, junior minister in national security and PNP candidate for East Rural St Andrew, was shot dead in Gordon Town Square in an exchange of fire with units of the police Mobile Reserve. McGann had been informed earlier in the night that JLP supporters had occupied the square and intended to remain there overnight to escort JLP candidate Joan Gordon to nomination. This had been done in answer to a threat from McGann that he would prevent Gordon from being nominated. McGann drove into the square with his bodyguard, and a PNP activist fired on the crowd of JLP supporters. They ran in panic to seek shelter by the undercroft of the police station as McGann and his group kept discharging their weapons.

The police radioed for help and it came in the form of Harman Barracks police in jeeps. McGann, mistaking the jeeps for JLP reinforcements, fired on the policemen and was shot dead in the exchange. Michael Manley went on television to promote the falsehood that McGann had been shot in the act of surrender, but it could not stand against the evidence. Manley apparently found nothing wrong with McGann charging into the square.

Five days after the Gunfight in Gordon Town, Michael Manley was on a tour of the south St Elizabeth constituencies. Travelling from Black River up to Southfield, he ran into a roadblock mounted by resentful residents who were protesting damage done to their fields when the tour had passed through earlier on the way to Black River. The blockade was cleared, but instead of going about his business, Manley demanded to know the whereabouts of the JLP candidate, Cecil July. He was directed to a house that was within walking distance and led a host of his supporters in that direction.

July saw the hostile group coming and ran to a nearby house for refuge. Men from Manley’s group broke into the house and searched for July. The men, in paramilitary fatigues, saw movement under a bed in one of the rooms, and thinking they had found July, discharged their weapons and killed two innocent playmates, Garth Bromfield, eight, and Maurice Stephenson, seven. The crowd retraced its steps and before long a truck went through the district announcing that Cecil July had been killed. An enquiry the following year cleared Manley of any criminal responsibility, although it was clear from the evidence that the fault was his.

The above accounts are not to give the impression that Comrades were all devils and Labourites all angels. There was death and violence on both sides, but the JLP was more often on the receiving end.

In the days after July 12, 1980, there was fingerpointing between the PNP and the JLP over the murder of seven people in Greenwich Town. The PNP claimed that their supporters had been murdered by JLP gunmen, and the JLP claimed that the PNP had murdered their own because they had changed sides.

Since 1980, the warring camps have achieved a balance of strength in the inner city and the incidence of violence has never since reached the horrendous levels of that year.

Additionally, the passions now invested in politics have not been as bitter as when it was a death struggle between democracy and socialism.

The final conclusion to be drawn is that Wills O. Isaacs, not Edward Seaga, is the father of the garrison constituencies and the concomitant political violence.