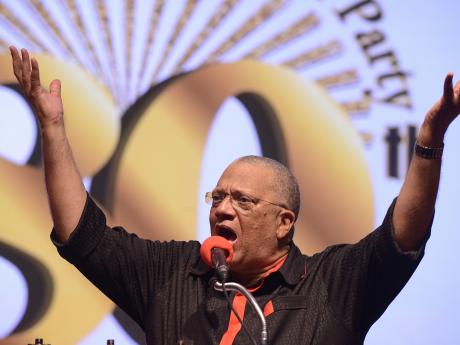 Saying the impending challenge for the leadership of the People's National Party (PNP) is an indication that comrades remain passionate about the party, Dr Peter Phillips today vowed that he would not allow the battle to interfere with its effective functioning as Opposition party.

The pronouncement from the under-scrutiny PNP president comes after former general secretary, Peter Bunting, yesterday confirmed his impending challenge for the leadership of the party.

But in a statement today, Phillips said: “The democratic tradition of the PNP remains vibrant and must ultimately be seen as an indication that comrades at all levels remain passionate about the party.”

Bunting, an investment banker and the Member of Parliament for Central Manchester, said that in the coming weeks, he will be engaging various stakeholders within the party and the wider society to discuss “the strategic direction in which I would lead the political movement that is the PNP, to hear their concerns and suggestions and finalise a contemporary, relevant political platform grounded in the foundational principles of our movement”.

However, Phillips today stressed that "I will not allow this challenge to endanger the viability of the PNP or its commitment to the Jamaican people to provide alternative leadership and effective governance”.

He urged for the challenge to be completed in a timely manner as he sought to defend his track record as general secretary, vice president and campaign director that has steered the PNP to many victories.

“Our paramount consideration must be to provide the Jamaican people with a strong and effective alternative to an out of control JLP government which has unleashed unprecedented scales of corruption on the Jamaican landscape,” Phillips said.