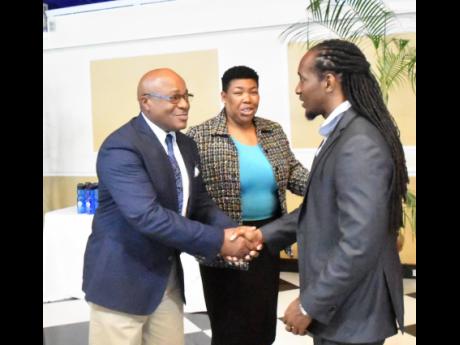 State Minister in the Ministry of Education, Youth and Information Alando Terrelonge (right) is greeted by Commissioner of Corrections, Lieutenant Colonel (Ret) Gary Rowe on his arrival at the Terra Nova All-Suite Hotel in St Andrew on June 5 for the Department of Correctional Services’ appreciation luncheon for teachers and instructors serving in the penal system. Sharing the moment is Deputy Commissioner Joyce Stone.

The society is being encouraged to facilitate the reintegration of persons who have been released after serving time in correctional institutions.

State minister for education, youth and information, Alando Terrelonge, said that this is necessary in order to ensure the successful re-entry of ex-offenders into society and to see to it that they do not revert to the deviant behaviour which landed them behind bars in the first place.

“I make a special appeal to the wider public … . Let us consider them as having been rehabilitated and allow them to get the jobs that they seek,” he said.

He was speaking at an appreciation luncheon hosted by the Department of Correctional Services (DCS) for teachers and instructors attached to adult and juvenile penal institutions at the Terra Nova All-Suite Hotel in St Andrew on June 5.

Terrelonge argued that if former inmates are not accommodated, “how else do we really expect them to move forward and make a positive contribution to society?”

“Persons who have done the crime and they have done the time …, allow them to reintegrate in society, especially those who have taken the opportunity to educate themselves,” he appealed.

The state minister noted that the DCS and the ministries of National Security and Justice have been doing a lot of work to ensure that ex-offenders are reformed and equipped to become productive members of society once they are released.

“We must not be so pessimistic or naïve about that work,” he said, while lauding the teachers and instructors for their contribution in this regard.

“Allow the process to work … . Have faith that our Jamaican brothers and sisters who have served time are repentant [and] rehabilitated, and allow them to get employment to earn a living for themselves and their children and make a valuable contribution to nation-building,” he stressed.