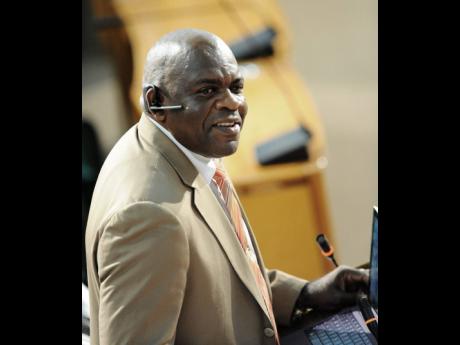 The time has come for a culture shift in the local construction sector that would see public facilities being retrofitted with features to provide safe, easy access for persons with physical disabilities, an Opposition senator has suggested.

The suggestion by the visually impaired Floyd Morris came last week as the Senate began debating a motion moved by him two years ago for systems to make Gordon House, the seat of the nation’s Parliament, more accessible to the disabled community.

Morris, seeking to underscore the gravity of the situation, invoked images of the wheelchair-bound, 98-year-old Eva May Wright being lifted by several persons up the stairs at Gordon House on April 16 to witness her granddaughter, Ann-Marie Vaz, being sworn in as a member of parliament.

“That tramples on the dignity of persons with disabilities. They don’t want to be lifted into any facility. They want to get the opportunity where they themselves can independently navigate the public facilities,” he said.

“And we owe it to them to make sure that our Parliament is fully accessible. The time has come for us to make the ultimate decision-making institution of our country accessible to our citizens with disabilities,” the lawmaker insisted.

Morris said he was endorsing the Government’s plan to construct a new parliament building at Heroes Circle in Kingston, outfitted with various features to improve access for persons with disability, and suggested that this could be the catalyst for the culture shift in the construction industry.

He said entities such as the National Works Agency (NWA), the Jamaica Public Service Company (JPSCo) and the National Water Commission should help to drive the shift.

Morris said that he spoke with Prime Minister Andrew Holness and NWA boss E.G. Hunter about the road construction taking place across the Corporate Area and the need for those sidewalks to be accessible for persons with disabilities.

“And I’m calling on JPSCo, too, because they put the light poles in the middle of the sidewalks, impeding the pathway for wheelchair users and persons who are blind, and also restricting the passage for able-bodied individuals as well,” he continued.

Government Senator Robert Morgan, in supporting the motion, noted that over the last three financial years, the Andrew Holness administration has spent over $1.5 billion “in the interest of the disabled”.

According to him, the funds were shared between organisations such as the Abilities Foundation, the Jamaica Society for the Blind and the Early Stimulation Programme.

“This is not lip service. This is money for the benefit of the disabled in Jamaica,” said Morgan.