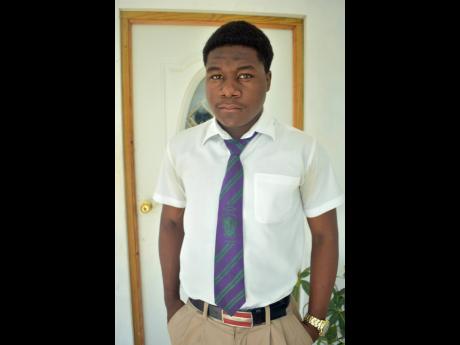 Seventeen-year-old William Knibb Memorial High School deputy head boy, Owen Dixon. is using his passion for photography and an interest in humour to operate his business, Minimax D, a venture which specialises in videography and comedy.

Started three years ago, Minimax D represents Dixon’s first step in his plan to be an internationally recognised photographer and prominent Jamaican comedian. Not only does he specialise in doing paid photoshoots, but his YouTube channel focuses on “making videos that would cover skits, [and] challenge and ask strangers for opinions on trending topics”.

Dixon’s creative passion has been burning long before he entered high school. He told The Gleaner, “I had always loved making videos, taking pictures and making people laugh, so I decided to start making money by monetising the videos I love to make.” This came in the form of money received from advertisements on his YouTube videos.

When asked about his experience balancing school life and his business venture, Dixon stated, “It is a bit pressuring, as I have to be putting out content to maintain different audiences.” However, he said the joy he experiences from being a role model to his peers, and putting a smile on people’s faces, dispels any negative feelings that may arise from him extending himself so much.

Not only does Dixon serve as president of his school’s Table Tennis Society and president of the Photography Club, but he is also the outgoing deputy head boy at William Knibb Memorial High School, a position he claimed as his crowning high-school achievement, as he has utilised it to serve the students of his school.

Yet, despite the myriad of activities he participates in and the amount of time needed to create and edit content, Dixon has successfully managed his time by using the strategy of timing and scheduling. He stated that his formula is to “allot small amounts of time each day to complete a set part of the job until it is finished”.

An additional challenge he experienced was the difficulty in procuring the necessary tools for his business. “Film equipment is not cheap, and I am not coming from a wealthy background where I can just take $100,000 to buy a camera when I feel like it. I have to budget and save. This business is an investment for me,” he stated.

Additionally, the support Dixon received, especially from his mother Stacy Hylton, also adds to the success of his venture.

“In the beginning, it was just my mother. She helped me with making purchases, but over time as my subscriber list grew, more people came on board and started to encourage and support me.”

Dixon stressed the importance of developing friendships with like minded individuals who will push you to achieve your goals. “I have a team of persons called the MaxD Squad with the same ambition as me. It is beneficial to have other people who share the same passion to help me along the journey,” he added.

For further information, MinimaxD can be contacted via their Instagram page @Mini_maxd or on WhatsApp on 876-295-7357. His YouTube channel is Minimaxd.