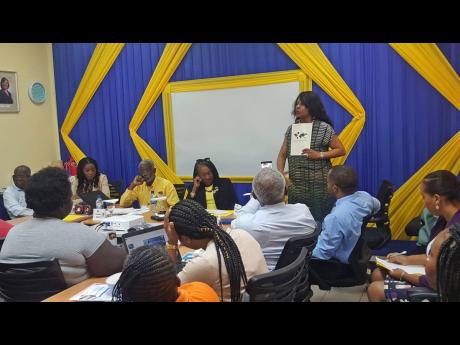 A recent parenting workshop held in St Ann’s Bay under the theme ‘Parents Matter Too’ is already reaping benefits for participants.

The workshop was hosted by the St Ann Homecoming Foundation in partnership with the HEART Trust/NTA – North East Regional Office, and attracted parents of boys participating in The Children-of-Our-Village Project, a venture of the foundation.

Topics covered included the importance of etiquette and social graces from a parental perspective, parental influence and career, and self-management for optimum parenting.

One parent, Carthia Wisdom, told The Gleaner that having applied things she learnt at the workshop, her relationship with her 12-year-old daughter has already started to improved.

“It (workshop) was very encouraging. I think they should have more like that, because I learnt a lot,” Wisdom said.

She added: “I have a daughter who is 12. Miss Barry spoke on teenagers and what she spoke about, I get to understand my daughter more, because she even was locking me out of her phone. After Miss Barry spoke and I understand everything, we have a different relationship now. It was really good, believe me.”

Wisdom said although she learnt a lot, she believes having the workshop over an extended period would have been even more useful.

Another parent, Balinda Hobson, expressed similar sentiments about the workshop.

“It was great because, actually, I learnt a couple of things there. I think they should have that more often, especially for young parents,” she said.

She said that among the things she learnt was how to treat children in ways other than beating them. She believes what she learnt will mean a better relationship between her and her children.

The workshop was deemed necessary to ensure that parents, were informed on some of the fundamentals in being better parents and to provide further guidance to what the boys would learn in the project.