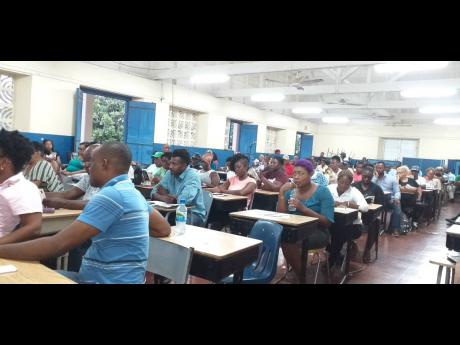 Deplorable roads, unemployment, and the lack of water were some of the concerns raised by business operators, other stakeholders, and residents at a Constituency Development Fund (CDF) constituency consultation meeting in East Portland on Thursday.

The meeting, which was held in the Titchfield High School auditorium, was the first for new Member of Parliament (MP) Ann-Marie Vaz. It was also aimed at sensitising the constituents about the intended use of the $20 million allocation by the CDF.

Director of the CDF, Kedesha Campbell, who sought to ensure that those present in the audience were provided with facts about the CDF and its spending towards community development, spoke at length about how the money is spent and the importance of having on board the various implementing agencies.

“You, the constituents, are the most important persons here today,” Campbell said.

“We have to build communities and change lives. Before the MP can spend that $20 million, there are some mandatory categories. Out of that $20 million, $1.5 million is used to administer the fund, $500,000 for Labour Day, $1 million each for emergency and welfare and social housing, and $3.5 million maximum for beautification.

“Since I am the director, I have made it mandatory that no MP can spend under $5 million for education. So if you have the CDF, I am sure that at least $5 million will be invested in our youths,” Campbell added.

She pointed out that while she understood the concern for roads, the CDF did not have the money to spend on that area. She noted that they try to be as creative as possible so as to stretch the funds as they seek to make communities better.

The director noted that she would prefer the construction of a state-of-the-art resource centre, a playing field, and a sports complex, which is reflective of community development, rather than providing personal benefits for individuals.

For her part, Vaz pledged to address the many concerns raised by constituents at the meeting, admitting that though the role of parliamentarian is new to her, she is eager to learn.

“This is a business, and I have $20 million to make this business successful,” she said.

“I am taking my time to learn it because I want to get it right. The people of this constituency have suffered long enough for lack of water, lack of road, lack of opportunity, lack of hope, lack of being able to dream. I have to give account for every cent, and I want to be held accountable. I myself am frustrated at the time it takes to get the benefits to individuals and select groups. It is to ensure that the money is used the way it should,” Vaz said.