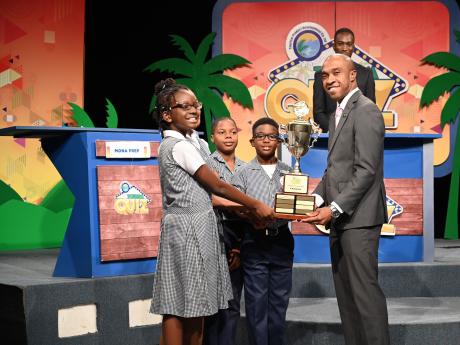 Mona Preparatory emerged as the champion of the second season of the TPDCo Tourism Quiz.

The St Andrew-based school triumphed over defending champions Broughton Primary with a 46-24 win.

The final match was aired on Television Jamaica yesterday.

The competition, which was created by the Tourism Product Development Company Ltd., has the objective to increase awareness of tourism and its benefits among primary level students.

Thirty-two schools participated in this year’s competition, which focused on core subject areas such as Mathematics, Language Arts, Social Studies and Science.

The participants were also quizzed on tourism facts, which ranged from attractions across the island to the history of the country’s tourism sector.

For their win, Mona Preparatory walked away with the major prizes which included the championship trophy, $100,000.00 cash prize for the school; from donors the team also received passes to Chukka Adventures, Beaches Negril, Mystic Mountain, Swamp Safari Village, Half Moon Hotel, gift vouchers and dictionaries from Sangster’s Bookstores and a tour of the Oasis of the Seas cruise line, courtesy of the Falmouth Land Company.

The 2019 staging of the TPDCo Tourism Quiz was endorsed by the Ministry of Education, Youth and Information, with support from the Ministry of Tourism and its agencies – Jamaica Tourist Board, Jamaica Vacations and the Tourism Enhancement Fund as well as Television Jamaica.