State mourning for Edward Seaga Guidelines for the public 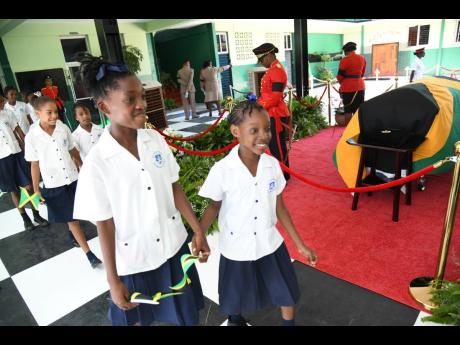 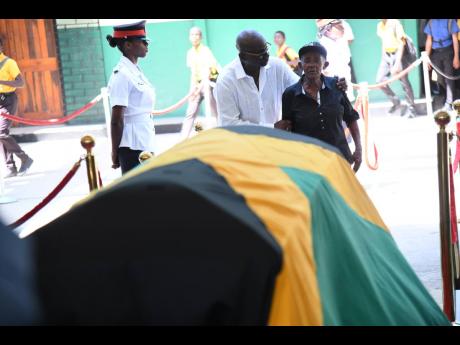 Rudolph Brown
Member of Parliament for Kingston West Desmond McKenzie (centre) and a Tivoli resident approach the coffin of the late former prime minister Edward Seaga yesterday as his body lay in state at the Tivoli Gardens Community Centre in Kingston.
1
2

The State Funeral for the former Prime Minister, The Most Honourable Edward Seaga, ON, PC, will be held on Sunday, June 23, 2019, at 12:00 Noon., at the Cathedral of the Most Holy Trinity, 1 George Headley Drive, Kingston, on Sunday, 23rd June 2019. Interment will follow at the National Heroes Park. A Period of Mourning has been announced by the Government among the activities to honour the life and service of the former Prime Minister.

We have prepared from our archives some relevant guidelines which are in keeping with the customary norms and might provide beneficial guidance to the general public with respect to the period of official mourning.

The designated period of mourning established by the Government of Jamaica will be from the morning of Wednesday, June 19, 2019, to the evening of Saturday, June 22, 2019, and the national flag is to be flown at half-mast throughout this period on all public buildings.

In instances where there is more than one flagstaff, the National Flag should always be raised on the right-hand side (left-hand as seen by the outside observer). Any other flag must be flown to the left of the national flag. The official Jamaican code for the national flag recommends that it is flown on public buildings, customarily from 8 a.m. until sundown; a similar procedure would be in order for those hoisting flags in locations outside the public sector domain.

There is a special procedure for flying flags at half -mast. The flag always shall first be hoisted close up and then lowered to the half-mast position; this is approximately the ‘hoist’ or width (short side) of the flag below the peak of the flagstaff and NOT halfway down the mast. Before the flag is lowered at sunset, it should again be hoisted close up and then lowered fully.

During the Period of Mourning, no public social function or official event should be held. It is customary during an Official Period of Mourning to curtail activity of a flamboyant or celebratory nature and restrict especially any activity that is noisy, until the official period of national mourning concludes, coinciding usually with the end of the burial ceremony.

Official Condolence Books may be set up by the declaration of the Government for signing by the general public for a duration commencing prior to, or to coincide with the Period of Mourning. They may remain open between the hours of 10 a.m. and 5 p.m. throughout the overall period leading up to the funeral, or on a predetermined schedule as announced.

In Kingston, since Monday, June 3, Condolence Books have been established at the Office of the Prime Minister, the Ministry of Foreign Affairs & Foreign Trade; and the Jamaica Labour Party Headquarters. Additionally, a book was opened at the House of Parliament on Tuesday, June 4. Books are being made available for signing at the Lying-in-State ceremonies at the Montego, Bay Civic Centre, St. John’s Anglican Church Hall – Ocho Rios, Tivoli Gardens Community Centre, Denham Town Community Centre and the National Arena.0

In Montego Bay, a condolence book was opened at the Office of the Prime Minister, Western Region, on June 3, 2019. Books were also opened at the Lying-in-State ceremonies at the Montego Bay Civic Centre and at the St. John’s Anglican Church Hall in Ocho Rios, respectively, on Friday, June 7, 2019. It should also be noted that books have been opened at Jamaica’s diplomatic and consular missions overseas since June 3. Condolence books will be placed for signing in all municipal offices in the 14 parishes.

For occasions formally denoted as a ‘State’ event, e.g., State ceremonies such as a State Funeral, national honours, service decorations or medals should always be worn by the relevant recipients. On a daytime occasion such as the Most Hon Edward Seaga’s State Funeral, the full-size badge should be worn, and NOT the miniature replica, which is properly worn at formal evening State events only.

Sedate colours and modest attire are suggested during a period of State mourning. It is traditional that men wearing neckties should select black, dark blue or other dark conservative ties with subdued patterns. Ladies should dress appropriately with corresponding conservative colours.

Uniformed officers from organisations such as St. John Ambulance, Red Cross, Boy Scouts, Girl Guides, Cadets (and especially if in attendance at the Lying-in-State, the State Funeral Service at the Holy Trinity Cathedral, or along the route to National Heroes Park), should wear black crepe or cloth armbands on the left sleeves.

As the coffin leaves the Cathedral, the Guard of Honour mounted by one of the battalions of the Jamaica Regiment will give a general salute, during which persons present should stand silently to attention. During the walking procession to the National Heroes Park, when the gun carriage draws abreast of spectators along the route, those in plain clothes should stand silently at attention, and remove headdress if worn; uniformed personnel should come to attention and uniformed officers (only) should. All civilians should remain on the outer boundaries of the uniformed street liners and follow the instructions given by the Marshalls throughout the Procession.

During the subsequent 19-Gun Salute for Prime Ministers (with the rounds at approximately one-minute intervals) at the National Heroes Park, all persons should behave appropriately and respectfully in both sound and movement.