Focus on defeating JLP not each other, Phillips tells Comrades 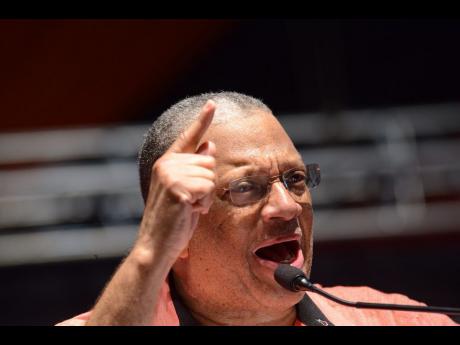 Phillips... Your support to me throughout these last two years have been invaluable.

People's National Party (PNP) president Dr Peter Phillips has told Comrades that they should concentrate their energies on defeating the Jamaica Labour Party and not each other.

Phillips made the plea on his social media pages Wednesday, three days after Manchester Central Member of Parliament Peter Bunting announced that come September, he will be running for the post of president of the 81-year-old party.

“Your support to me throughout these last two years have been invaluable and my source of strength and inspiration," Phillips wrote.

"Our movement was founded and rooted in the principles of democracy to give all Jamaicans an avenue to make their voices heard and an opportunity to serve at all levels. As we proceed to test our Party’s internal democratic pillars we must concentrate our efforts, energies and resources to defeating the JLP, not each other."

Bunting, an investment banker and former PNP general secretary, has sought to explain that he is running for the presidency to give the PNP a better chance at winning the next general election.

He said although Phillips has made an outstanding contribution to the party and the country in various positions in the past three decades, he has not been a tranformational PNP president.

“Since becoming president, he has not implemented a single transformational initiative within the party and is just not seen as the right person for this time,” Bunting said in the statement announcing his candidacy.

He said the party’s performance in East Portland confirmed that there has been no demonstrable improvement to the areas recognised as deficient.