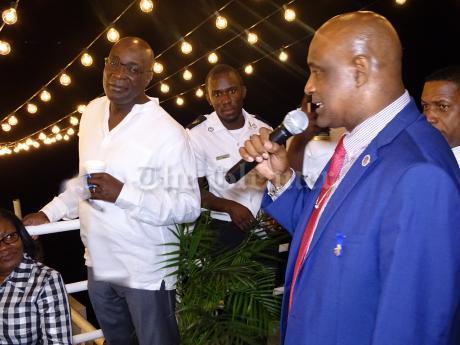 President of Caribbean Maritime University (CMU), Professor Fritz Pinnock, was treated to a surprise birthday party at a St Andrew hotel last August by a “group of persons” at the Education Ministry.

However, the cost of the soirée has not been disclosed.

“I am not armed with that information today so I would have to do some further research and provide you with that information,” Dr Grace McLean, permanent secretary in the Ministry of Education, told members of the Public Administration and Appropriations Committee (PAAC) of Parliament today.

The disclosure came after McLean was questioned by opposition member of the committee Mikael Phillips about an email she circulated to staff at the ministry.

“Dear All, on behalf of Dr Grace McLean and the Ministry of Education, Youth and Information, you (sic) being invited to a SURPRISE BIRTHDAY party for Professor Fritz Pinnock,” read the email, dated August 14, 2018.

The email indicated that the party would be held at the Courtleigh Hotel.

“This surprise birthday party that was held on Thursday, August 16, 2018, for Professor Pinnock is one such that the ministry hosted?” Phillips questioned.

“I’m not going to say it was the ministry that hosted it. We actually were asked, a group of us at the ministry, to organise a party for Professor Pinnock,” McLean responded.

“It was actually key persons within the ministry, as well as Caribbean Maritime University, that was invited to that celebration,” she added.

It marked the latest in a string of birthday parties organised by state entities for public officials.

In January last year, Petrojam, the state-owned oil refinery, hosted a US$11,260 “surprise” birthday party at a St James hotel for then energy minister Dr Andrew Wheatley, complete with a US$1,000 "four-tiered topsy turvy chocolate cake."

Wheatley has since repaid the cost of the party.

Two months before that, in November 2017 Petrojam also hosted a surprise birthday party for then chairman Perceval Badaho-Singh.

Sacked education minister Ruel Reid was feted at two parties, one on board the yacht, Caribbean Queen, docked in the Kingston Harbour and the other at a Jewel resort in St Ann.

CMU has admitted that it made payments towards the yacht party, but insisted it had nothing to do with the hotel soirée.