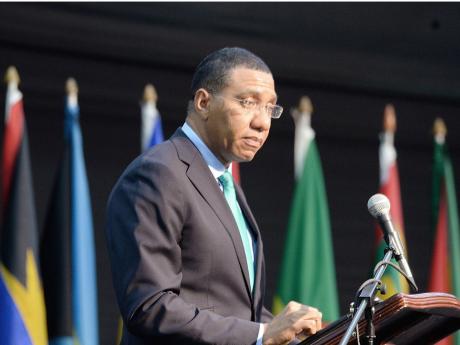 Prime Minister, Andrew Holness, says the Sexual Harassment Bill, which seeks to protect women from violence, harassment and discriminatory practices in the workplace, is to be tabled in Parliament soon.

This, he said, is among measures being instituted by the Government to safeguard the nation’s workers, particularly the most vulnerable.

The Prime Minister was addressing the high-level meeting of the 108th Session of the International Labour Organization (ILO) Conference on Wednesday in Geneva, Switzerland.

"We are working to address issues of gender discrimination and social protection for all workers, including domestic workers,” he told the forum.

“The Government is paying keen attention to the quality of jobs and the conditions of work,” he said.

In addition, the Occupational Safety and Health Bill was tabled and is now being examined by a Joint Select Committee of Parliament.

“When the Bill is passed, it will establish a robust legal framework to protect and enhance the health and safety of the Jamaican worker in the workplace,” the Prime Minister said.

In the meantime, Holness reiterated the Government’s commitment to the Decent Work Agenda, and that it is continuing its work to empower citizens with education and training, to make them more marketable, employable and productive in a competitive labour market and economy.

“In fulfilment of our Decent Work Agenda, the Government has increased its effort and resources in making our citizens ‘workforce-ready’ through various special training modalities and apprenticeship initiatives,” he pointed out.

These, he said, include the Career Advancement Programme; the Housing, Opportunity, Production and Employment (HOPE) Programme; and the Jamaica National Service Corps.

“Tens of thousands of young Jamaicans are made work-ready, and tens of thousands more continue to be trained through the traditional modalities of our National Training Agency,” he said.

He  pointed out that decent work must ultimately mean that the worker can create wealth and own assets from his or her effort, noting that to this end, the Government has removed employee income tax from more than 60 per cent of all workers in Jamaica.

“We have also sought to empower our workers by making special provisions for them to purchase shares in profitable public-sector enterprises which are being divested,” he said.