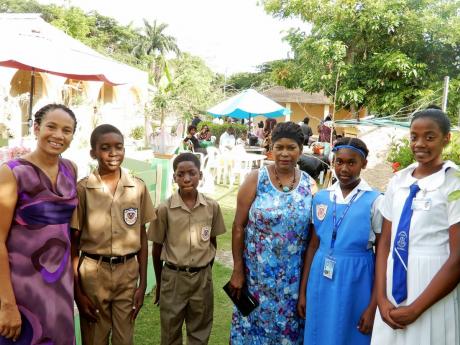 For the third year, St Mary resident Cheridah Wilson has awarded scholarships in the name of her grandson, Amiri Raja Takemoto Hamilton, aimed primarily at assisting students attending schools in St Mary and St Ann. This year, five students from schools in St Mary benefitted, four from Iona High School in Tower Isle and one from Marymount High School in Highgate.In addition, a printer was donated to Iona High.This year, the $100,000 award was split into two and shared by Shameka McKenzie and Omar Bagnal, while runner-up Joel Johnson received $25,000.

All three, along with David Williams, received a laptop and school supplies. The four attend Iona High. Meanwhile, Marymount student, Torianna Hawkins had her wish for a laptop come true when she collected one from Wilson.

It was a touching moment when she went up to collect the laptop, as she was overcome with emotion and burst into tears. She was to rebound nicely, later, and read a poem she wrote in honour of Wilson.

Guidance counsellor at Iona, Kareen Purcell Bourke, who assisted Wilson in handing out the awards, was surprised when it was announced that a printer is being presented to the school. She expressed her gratitude not only for the equipment, but for the assistance given to students at the school.

“This is the third year, the first year we had three students (from Iona), it was two last year, and this year we have four. It’s heart-warming to know that someone within the community sees the need. Her son went to the prep school and her grandson sees the need to pour into a country where he has never resided, he sees the need to be benevolent. We really are grateful.”

Wilson, in the meantime, said she is happy to assist.

“It makes me so happy. I just hope that more returning residents would do what I’m doing,” she said. “I have friends in the US who have given me the book supplies, but all the finances have been coming from my account. This year, I was able to get US$250 from my friends in Alaska and Florida, but most of the money is from my account. I’m just hoping others will adopt even one family.”

Wilson said she had initially agreed to give the scholarships for a period of five years; but would be willing to go beyond that.

“When I started, I told them that I would do it for five years, this is the third year. If God helps me, I am willing to go another five years, if I’m around.”

In addition to the scholarships, Wilson has also assisted in other areas, including helping a basic school in Priory, St Ann.The scholarship is available to students from single parent homes, ages 12 to 17 years, and preferably from the parishes of St Ann and St Mary. Prospective recipient are required to write an essay stating their needs and why they should be awarded the scholarship. Students are required to have a GPA of 2.5 or higher, exhibit orderly conduct at all times, and is driven to succeed academically.

Most importantly, students must attend school and church on a regular basis.