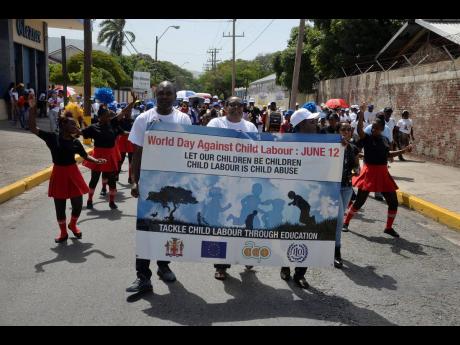 In commemoration of World Day Against Child Labour, the Ministry of Labour and Social Security, with the help of the Child Protection and Family Services Agency, schools and other interest groups, took to the streets of downtown Kingston to bring attention to the issue of child labour.

The march, which started minutes before 10 a.m., saw State Minister Zavia Mayne and other persons from the labour ministry heading the march party, holding a banner bearing the message “Let our children be children, child labour is child abuse”.

Following closely behind were members of the St Michael’s Steppers Band, decked out in their red and blue uniforms, playing popular songs on their drums and trumpets.

Students from Kingston College, St George’s College, Pentab High School and St Aloysius Primary, who made up the majority of participants, could be seen wearing caps and shirts indicating their opposition to child labour.

The march, which had more than 100 participants, began at the Ministry of Labour and Social Security on North Street and headed to East Street.

The group then made its way to Charles Street then on to Duke Street, where they began to chant “No child labour,” before coming to a halt at the Houses of Parliament, where students and their teachers from the St James-based Catherine’s Hall Primary School awaiting a tour of Gordon House.

As the march continued down Duke Street, students from St Aloysius Primary School peered through the fence of the institution to catch a glimpse of the procession.

From Duke Street to Sutton Street, then on to Church Street, the group made its way to the northern end of the St William Grant Park – located in the heart of the city – where the procession came to a halt.