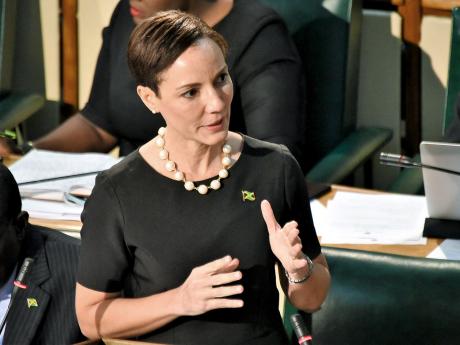 The Senate descended into a shouting match Friday morning after Foreign Affairs and Foreign Trade Minister Kamina Johnson Smith came under fiery questioning from opposition senators after she revealed that her ministry knew nothing about the maltreatment of four Jamaican fishermen, prior to media reports on Thursday that the men have sued the United States Coast Guard.

The crosstalk got so heated that it prompted Senate President Tom Tavares-Finson to walk out the chamber for a short while.

“We have also seen a video in which the fishermen concerned cite experiences of shocking treatment during an extended period of detention that would amount to human-rights abuse,” she said.

Johnson Smith said that the allegations were of serious concern to the ministry, as the rights of citizens at home and abroad were always of paramount importance to the Jamaican Government.

The foreign affairs minister said that the Government was also aware that the American Civil Liberties Union (ACLU) has agreed to provide the men with legal representation and that the matter was now before a court of law in the United States.

“It is hoped that justice will be delivered through that process,” Johnson Smith said.

However, opposition senators K.D. Knight and Lambert Brown were dissatisfied with the minister’s response.

In his remarks, Knight questioned if the actions of the US Coast Guard were in breach of any agreement between the US and Jamaica, such as the Shiprider Agreement. He also wanted to know what steps the Government would take at the diplomatic level.

In her response, Johnson Smith said: “We are not in possession of any information which would allow us to answer the questions posed by Senator Knight."

“The matter is before the (US) court and we, therefore, have to be quite sensitive as to how we address those things,” she added.

However, Knight noted that the fact that the case is being heard in an American court did not prevent the Jamaican Government from engaging its US counterpart on the diplomatic front to address the issue.

“Nothing about sensitive statements can arise to prevent a protest,” Knight said.

When Knight pressed for an answer as to whether the Shiprider Agreement was breach, the newest government senator, Robert Morgan, rose on “a point of order”.

The senior opposition senator then took aim at Johnson Smith.

“It is incompetence why this is happening now on your part, Minister. You are an incompetent minister. Something as urgent as this from yesterday morning at least … you don’t even know, you haven’t even looked at the Shiprider Agreement,” Knight said. However, an acerbic Knight turned his fury on Morgan.

“When I am questioning the minister, it would be wise for neophytes to be quiet,” he said.

Government senator Charles Sinclair sought to defend Morgan, claiming that Knight’s remarks were not in keeping with the Standing Orders.

“I have never known 'neophyte' to be an abusive word,” Knight retorted.

Morgan shot back: “I wish to ask that you emphasise to the senator that his experience in this House gives him no more authority to pronounce on matters of Jamaica than myself … .”

However, Knight charged: “I usually, and on this occasion, ignore rude wimps.”

In his comments, Brown wanted to know whether Johnson Smith had called in officials from the United States Embassy in Jamaica to “explain the abuse and slave-like treatment of Jamaicans held unjustly by the US authorities?" He said this impacted the rights and liberties of “our Jamaican brothers”.

Johnson Smith said: “Before any responsible minister were to call in a representative member of the diplomatic corps, one would presume that that minister would have obtained as many facts as possible about the matter. I have indicated to the Senate that we are investigating; we are seeking to understand the case more because it only came to our attention yesterday."

The foreign affairs and foreign trade minister said she had acted responsibly in the matter.