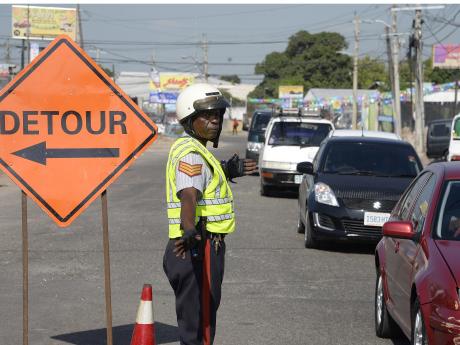 In order to complete pipe-laying works near the Dunrobin Avenue intersection, the National Works Agency (NWA) will be closing a section of the southbound lanes along Constant Spring Road between Gore Terrace and the Sandy Gully Bridge.

According to the NWA’s Communication and Customer Services Manager, Stephen Shaw, the lanes will remain closed for three days and are scheduled to reopen on Monday, June 17 at 4:00 a.m.

Shaw explains that underground works in the area have previously proven challenging as there are several existing pipelines at the location, which are aged and brittle.

This, he says, has resulted in a number of breaks in the past.

The NWA says this weekend’s planned closure will allow for the completion of works to install a new 28-inch transmission main and two sets of distribution pipes on either side of the roadway.

These will replace three existing pipelines and prevent the need for the National Water Commission to disturb the road surface, in future, when carrying out repairs on the distribution lines.

During the period of closure, the northbound carriageway between West Kings House Road and Dunrobin Avenue will accommodate two-way traffic, and those motorists heading towards Half-Way-Tree.

Motorists are urged to obey warning signs and the direction of flag persons and the police.