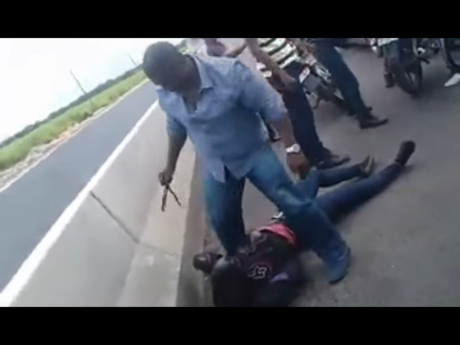 A policeman stands over the female motorcyclist after she was reportedly slammed to the ground in this screenshot from the video recording of the incident.

Ten months after an incident caught on video in which a policeman appears to body slam a female motorcyclist to the ground during an arrest, the Independent Commission of Investigation (INDECOM) has completed its probe.

The incident happened along the Mandela Highway last August and involved two members of the Jamaica Constabulary Force.

Hamish Campbell, assistant commissioner of INDECOM, confirmed yesterday that the findings of the investigation have been turned over to the agency’s legal team who will determine the next course of action.

“They will make an assessment then they will determine whether there is sufficient to support a prosecution,” Campbell explained.

The INDECOM legal team is expected to make a decision “fairly soon.”

Campbell said the legal opinion will be sent to the Office of the Director of Public Prosecutions for “confirmation.”

Among the evidence gathered by investigators is a video recording of the August 17, 2018 incident, which was posted on YouTube.

It appears to show one of the cops grabbing the woman in the chest area and then slamming her to the ground before dragging her motionless body across the road surface.

Eyewitnesses claim she was hit from her motorcyclist by a car in which the policemen were travelling.

The woman and the two cops have given statements outlining their account of the incident.

The names of the cops and the division to which they are assigned have not been made public.