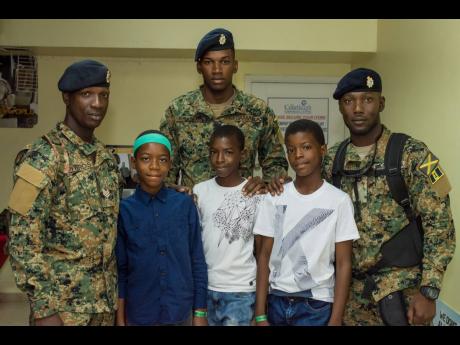 Contributed
Members of the JDF were out to support OurSons 2018. 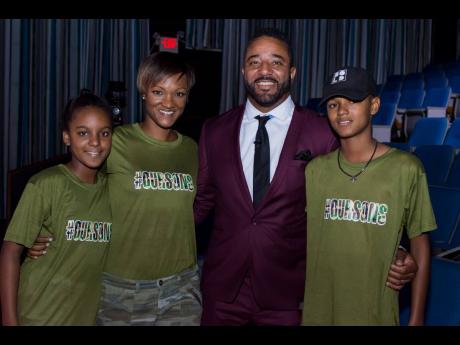 As part of its mandate to mould, nurture and positively shape the lives of boys from a wide cross-section of socio-economic backgrounds, B3 Parenting will again embark on a mission to connect in the most relatable and impactful way with boys aged 13-19 years today through their ‘OurSons’ initiative.

Slated for Ballaz Liberty Park in Kingston, the event is set to run from 10 a.m. to 3 p.m.

According to Michelle Gordon, parenting lifestyle consultant, initially, the OurSons initiative was launched to provide help for parents who sometimes struggle to connect with their boys, especially during the teen years.

However, this outreach, she said, morphed into also providing boys and young men with a platform and an environment that allowed them to be open to receiving guidance and direction from someone other than a consistent parent or guardian.

“Our audience of boys and young men comprises tomorrow’s lawyers, doctors, accountants, footballers, athletes and scientists. But our reality is that there may also be among them tomorrow’s abusers, scammers, gunmen and other criminal elements. OurSons is doing our part in minimising the growth and development of the latter,” Gordon said.

Gordon indicated that as a nation, we have touted our men as being the head of the home, and with this in mind, they are expected to lead, guide and direct. However, she believes that if the ‘head’ isn’t guided in the right direction, then there is a problem.

“I think that today, we are seeing the effects of those problems. There is no time like the present to start accepting responsibility for the mistakes we made and continue to make as parents, and there is no better time than now to try to correct those shortcomings,” Gordon said.

Investment in our children, she said, is more than just sustainable, and it is fundamental to our success as individual family units and, on a wider scale, as a nation.

“For me, this investment goes beyond just sending our children to school. We ‘invest’ in vaccinations because we don’t want them getting sick. We ‘invest’ in childhood bank accounts to start their financial journeys. These are all parts of our plans as parents when we think about our children’s futures. But I believe that we also need to invest in their emotional intelligence and well-being,” Gordon said.

For this year’s staging of the event, Gordon said they are excited to simply get the boys outdoors. “There will be a lot of testosterone and a lot of adrenaline bouncing around! The concept of using sports, football in particular, is to expose ‘OurSons’ to life lessons through something that they already love,” Gordon said.

Sean Williams, transformation and leadership trainer of BelieveDoChange, and André Virtue, motivational football coach of Ballaz Football Academy, along with a team of facilitators, will be sharing powerful life nuggets in simple and traditional football terminologies.

“It will be an engaging day where the boys will have the opportunity to listen and share with trained facilitators who are also football coaches. We will have six-a-side football matches and engaging skill sessions. There will also be light refreshments, giveaways and other surprises,” Gordon said.

LIT Letters, Info Exchange Limited, First Rock, the Supreme Ventures Foundation, Ambucare Ambulance Services, Creative Media Agency, Image One Limited, AutoVision and Accessories Limited and Yohan Blake and his YB Afraid Foundation all share the vision for OurSons and have made a positive impact on the lives of these young men.