Clarendon SOS | Twin tower of strength - Crippled by a shot to the spine, sister lifts her spirits – and her body 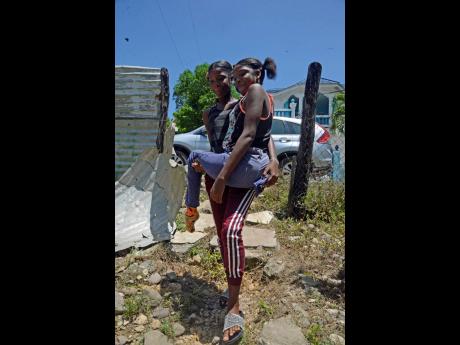 Lionel Rookwood
Brianna Harris is carried around by her twin sister, Brittania Harris, on a stony footpath to their home on John Crow Lane in Effortville, Clarendon, on Sunday, June 9. 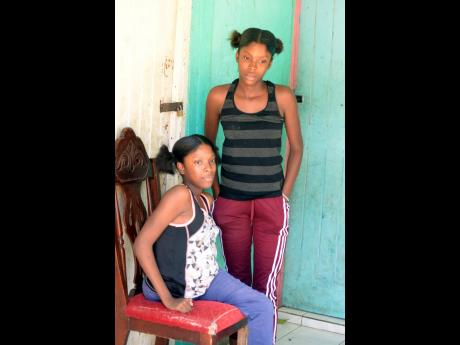 Lionel Rookwood
Brianna Harris sits beside her twin sister Brittania in Effortville, also called ‘Farm’. Says Brittania: “I don’t really go out, because when I’m out, I’m always thinking about my sister.”
1
2

At six years old, Brianna Harris was struck by a bullet in the May Pen Market in Clarendon. The experience changed her features, her abilities, and the lives of everyone around her – especially her twin sister.

Now 16, the teenager said she has finally broken free from the pain she has suffered throughout her childhood and is ready to embrace life, even as death surrounds her in the community of Effortville, more popularly called ‘Farm’, in the central Jamaica parish.

At least 10 persons have been killed in Effortville in recent months.

Since leaving the hospital after being admitted for two months, Brianna’s life has been a roller coaster of confusion, frustration and helplessness, even as her sister and mother try their best to comfort her.

The gunmen, who were reportedly robbing an establishment in the market, shot her in the spine, crippling her and causing her to lose a leg. A woman, the intended target, was killed by the gunmen.

“My life has changed. I can’t really walk up and down like my friends, and I can’t go out and enjoy myself, but I still enjoy it, I try my best,” Brianna, an 11th-grader at Central High School in Clarendon, told The Sunday Gleaner last week.

“I can’t use the bathroom by myself. Sometimes I can’t dress myself. Like I can’t put on a skirt or shorts; I have to ask for help. But I don’t really feel any way because I have my sister and my friends.”

For years, Brianna’s sister, Brittania, has been a tower of strength. During the recovery years, she helped Brianna fight through the pain and assists her with even the most routine of tasks at home.

Brittania is in charge of getting her sister dressed and pushing her to school each morning in a worn wheelchair. Once there, her obligations to her sister continue, even as Brianna stresses over being a bother to her sibling.

THE BEST OF FRIENDS

“No matter what, even though we argue every day, she is still my best friend,” said Brianna, laughing, as she confessed that she is the more miserable and feistier of the two.

According to Brittania, her sister is also her best friend, over whom she frets constantly whenever they are apart. She said, however, that both would benefit greatly from a new wheelchair for Brianna and the construction of a ramp in their home.

“We have a very good bond because she can’t walk, so, therefore, I am her foot. I do everything for her so. Other kids go out and enjoy themselves, but I don’t really go out, because when I’m out, I’m always thinking about my sister,” said Brittania, who is also awaiting her Caribbean Secondary Education Certificate exam results.

“I have to push her to school and ensure that she gets lunch. I also walk around and ask for things for her if she doesn’t have it,” said Brittania, recalling times when taxi operators declined to carry them to school, as Brianna had to travel with a waste receptacle.

Shauna Lee Sterling, the girls’ mother, has tried to block the ill-fated incident from her memories. Sterling said, however, that she is hopeful that the authorities would assist her daughter with a new wheelchair, as the one she uses is past its best and without a battery.

Meanwhile, Sterling said she is hoping to leave John Crow Lane, one of the toughest areas in Effortville, as she fears for her children’s safety.

“If it is even one week, dem must can sleep comfortable,” she said.

Brianna is awaiting the results of five CSEC results and is confident she will do well in them, particularly English language, which the avid reader loves.

Despite her hardship, the 11th-grader is optimistic about the future and has big ambitions of becoming her own boss.

“I would like to be a self-employed entrepreneur. I don’t really think so far as to what I want to do exactly,” she said. “But I want to own my own business. That is my aim.”