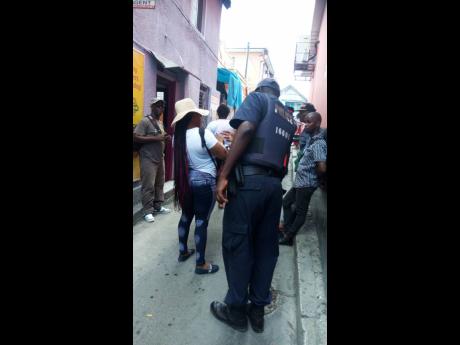 Hopeton Bucknor
A policeman questioning a woman about sprays and oils that were found in her bag in Montego Bay, St James, on June 6, 2019. The woman was detained on suspicion of practising obeah. 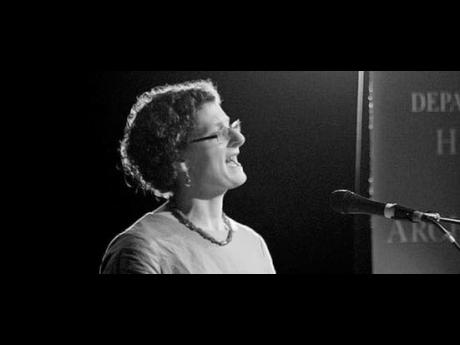 Obeah is in the news again, since Minister of Justice Delroy Chuck said earlier this month that he hoped to see the Obeah Act repealed. Responses have ranged from the attorney general’s claim that “obeah has always been known” to do “nothing but harm to others” to declarations that the law is a “discriminatory colonial anachronism” (@wcchen on twitter).

As a historian, I have closely studied the legal regulation of obeah throughout the Caribbean, during slavery and after. I have reviewed reports of court proceedings, and debates in legislatures and in the press. This history shows that laws against obeah have worked to uphold colonial power and to harass poor people.

Until the 1950s, Jamaicans were regularly prosecuted under the Obeah Act for all kinds of religious rituals. In the early 20th century, balm healers, Revivalists, Garveyites, and people who later joined with Leonard Howell to form Rastafari were all prosecuted for obeah, even though many of them were resolutely hostile to obeah themselves.

Readers can examine evidence from hundreds of cases on my research website, https://www.caribbeanreligioustrials.org.

A few obeah cases involved people trying to harm others, and some, especially in Kingston, involved efforts to defraud people. The vast majority did not. When police constables disguised themselves and sought out the help of those they wanted to prosecute for obeah, they told stories about ill health and problems with love, employment, or business, not about efforts to harm their enemies.

Over the last generation, many laws against obeah have been quietly repealed or revised away. Obeah was decriminalised in Anguilla in 1980, Barbados in 1998, Trinidad and Tobago in 2000, and St Lucia in 2004. In Guyana, the government last year announced its intention to remove the crime of obeah from the criminal code. In Jamaica, the last conviction for obeah that I found was that of Cindy Brooks, in 1964. The last arrest for obeah I located was in 1977.

Although the law is no longer used, in Jamaica, talk of its repeal produces concern. Obeah, as well as naming a broadly defined crime, is also a term for hostile spiritual practices that many Jamaicans fear. Yet those who think of obeah only as an active evil presence should look more carefully at what the Obeah Act prohibits and why.

Obeah was first made illegal in 1760, as part of a sweepingly repressive act passed in the aftermath of Tacky’s Rebellion, the largest uprising of enslaved people in the 18th-century British-colonised Caribbean. The law was a direct response to the fact that the rebellion’s leaders were advised by obeah men who attempted to give them courage, solidarity, and spiritual protection.

The law against obeah lapsed with the end of slavery in 1834. The Jamaican government, like other Caribbean governments, acted quickly to ensure that obeah remained a crime. The 1833 Vagrancy Act prohibited obeah. The first stand-alone Obeah Act, passed in 1854, made obeah a crime punishable by flogging and imprisonment. It equated obeah with ‘myalism’, thus defining obeah not just as acts meant to cause harm but as connected more broadly to religions with African origins.

Further changes to the law took place in 1857, 1892, and 1893, before stabilising in the Obeah Act 1898. This legislation, with minor amendments, remains in force today. The 1898 act was intended to make it easier to secure convictions. It maintained the equation of obeah and myalism, and defined the crime of being a ‘person practising obeah’ as: any person who, to effect any fraudulent or unlawful purpose, or for gain, or for the purpose of frightening any person, uses, or pretends to use any occult means, or pretends to possess any supernatural power or knowledge.

Even more important, the 1898 act introduced the legal category of the ‘Instrument of Obeah’, which it defined extraordinarily broadly as “any thing used, or intended to be used by a person, and pretended by such person to be possessed of any occult or supernatural power”. The burden of proof now fell on those in possession of an ‘instrument of obeah’ to prove that they were not practising obeah.

In one typical case from 1928, Zachariah Kerr of Westmoreland received a nine-month prison sentence for practising obeah. The evidence against him was that Kerr had told another man that he could cure him, gave him a bottle of salt water, lit three lamps, spoke in an ‘unknown tongue’, suggested that the man seeking help join his church, and accepted five shillings. Norman W. Manley took the case to the appeal court, but lost. The judge concluded that Kerr’s actions did contravene the obeah law: the ‘unknown tongue’ (supernatural power), the salt water (instruments of obeah), and the five shillings (for gain) between them satisfied the legal requirements.

This sweeping definition could theoretically apply to almost any form of religious activity that makes use of material objects and where religious specialists accept financial contributions. The Caribbean Court of Justice recently ruled, in its 2018 decision on the gendered clothing law in Guyana, that broad and vague wording of colonial-era laws is unconstitutional. It decided that a law so vague that its application is arbitrary breaches the rule of law. Similar criticisms could be made of the Obeah Act.

In practice, the law was used almost exclusively against poor Jamaicans, mostly black but also sometimes Indian. This was not accidental. Those who supported harsh obeah laws, including many middle-class Jamaicans, intended that the law should intervene broadly in everyday cultural life to wean Jamaicans away from beliefs and practices understood as connected to Africa.

For instance, an anonymous Gleaner correspondent in 1890 called for a harsher obeah law, complaining that belief in obeah was “an indelible stigma on the land we live in”.

One context for the tightening of the law was the increasing power of independent black-led religious movements, including Bedwardism and Revivalism. The law’s supporters also wanted to prove to the outside world – and specifically, to observers from Britain and the United States – that Jamaica was a ‘civilised’, ‘modern’ place, by which they meant that its people rejected their connection to Africa, their blackness.

The primary function of Jamaica’s Obeah Act has been to reinforce class and race hierarchies. Repeal would make little difference to everyday life, because the act is never used. But it would indicate that the country no longer endorses a law initiated to protect slavery and renewed to symbolise Jamaica’s hostility to its African connections. It would be a rejection of cultural colonialism.

- Diana Paton is William Robertson professor at the University of Edinburgh. She is the author of The Cultural Politics of Obeah (2015). Her research on obeah can be explored at http://www.obeahhistories.org and https://www.caribbeanreligioustrials.org. Email feedback to columns@gleanerjm.com.