Teenage dad mans up to duty 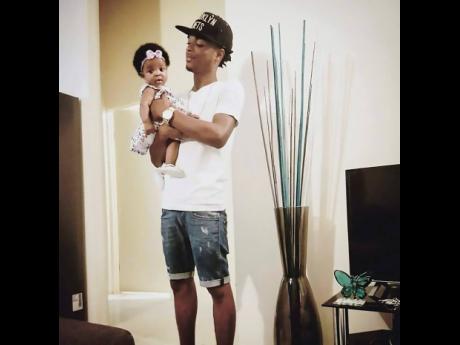 As a young budding footballer who represented Jamaica College in Under-14 and Under-16 football competitions, Richard Byfield’s big dream was to make the Reggae Boyz team one day.

Therefore, when he transferred to grade 12 at Kingston College in September 2015, he was ecstatic about the opportunity to pursue his dream as a footballer and improve his skills under the guidance of Ludlow Bernard, a coach whom he admired for his ability to influence the performance of young people.

A purposeful and focused youngster, Richard had just completed five years at Jamaica College, emerging with seven passes in the Caribbean Secondary Education Certificate (CSEC) exams, two of which were achieved while in fourth form.

Furthermore, he was a five-year scholarship recipient of the then Jamaica National Building Society, now JN Bank, as a result of being the top student in the Grade Six Achievement Test at Maxfield Park Primary School.

One month after representing his new school in Manning Cup football, a telephone call turned his world upside down, sending his football dream into a tailspin. His then 17-year-old girlfriend, Shamoi Brown, was pregnant.

“I was shocked, scared and in a state of confusion. I was worried about how it would affect my future goals and how my parents would react,” he related.

The stress affected his schoolwork. For about two months, Richard kept the information to himself, then mustered the courage to tell his parents, who were residing in the United Kingdom. After many rehearsals about what he would say, he took the plunge to reveal the secret.

“My mother began to cry and telling me how often she warned me not to get into trouble. My father, surprisingly, was calm. He told me to be strong and that he would be there to support me.”

Richard, who had just turned 18, intended to quit school and look for a job. However, his parents made a pact with him that they would provide financial support to his unborn child and his girlfriend, so that he could complete sixth form.

Despite the stress of being prematurely ushered into fatherhood, and being absent from school regularly, Richard did well in the three subjects which he sat in CAPE Unit I exams.

In July 2016, his daughter, Liyah Rose, was born. Rose was also the name of his deceased grandmother, who was his guardian while living in the tough Maxfield Park community. She passed away while he was in grade 10.

Richard’s plans to move on to upper six were shelved when his parents were no longer in a position to support him and his daughter financially. He registered in an evening institution to complete Unit II of CAPE, while he searched for a job with the assistance of his football coach.

“I sent out several résumés and walked from place to place dropping them off. I made many telephone calls, checked the newspapers, and asked persons if they knew of any jobs,” he revealed.

It was not until one year later that he found employment at a bakery working as a dispatcher from 2 p.m. to 10 p.m., sometimes working until 1 a.m.

“It was my first job. They were impressed with me and I was even made a team leader, leading people who were twice my age,” he disclosed.

Though he and his girlfriend are no longer in a relationship, Shamoi feels fortunate that Richard stood by her throughout her pregnancy and continued to be a good dad.

“I feel great and I thank him [for being there for me]. Some young men would have abandoned the baby and the mother and wouldn’t go to look for work, so I respect him for trying his best to make me and the baby happy,” said Shamoi, who is now a make-up artist.

Similarly, his mother, who requested that her name not be published, was pleased that he acted responsibly by choosing to be in his daughter’s life.

“As a mother, I was a bit disappointed to know that after all the hard work, advice and investment, Richard was fathering a child at the age of 17. But Richard, I would say, was forced to be a man in order to support his child. He stopped going to mainstream school and opted for evening classes, in order to find a job. Today, I must say I am a proud mother and grandmother, knowing that my son is being a responsible father to his child,” she said.

Karen Oliver, communication specialist at The Jamaica National Group, who oversaw the reading programme and scholarship from which Richard benefited in 2010, while attending Maxfield Park Primary in St Andrew, said that she was not surprised at his decision to step up to his responsibility as a father.

“He stood out for me because he was polite and mature. He kept in touch with me regularly to update me about how he was getting on in school. He took his schoolwork seriously and maintained an average exceeding 70 per cent at the end of each school year, which was a requirement for the renewal of his scholarship every year. He was also keen on becoming a professional footballer,” she recalled, affirming his character as a responsible young man.

In September last year, Richard, who is now 21, migrated to the United Kingdom to be with his parents and two siblings, as well as to pursue the Bachelor of Arts degree in marketing at Middlesex University, with the hope of becoming an entrepreneur.

Facilitated by the conditions of his tier-four student visa, Richard works 20 hours per week after school at a diner, to care for his almost three-year-old daughter, who remains in Jamaica.

“I really miss her. I talk with her on video chat almost daily. She is a very prime little girl who is not shy. She started to walk and talk very early, and you cannot help noticing her,” he said with pride.

Richard is planning to visit Jamaica later this year to see his daughter off to preschool.

“I can’t wait to see her,” he said. “I will be there to take her to school. I have missed out on a lot, hence I need to spend time with her to maintain the bond.”

Although his dream of becoming a professional footballer has been dashed, having his daughter in his life has diminished that disappointment.

“I look on the bright side,” he reflected. “Since my daughter came into my life, I am more purposeful and focused, because I need to create a better life for her. Already, she has changed my life.”