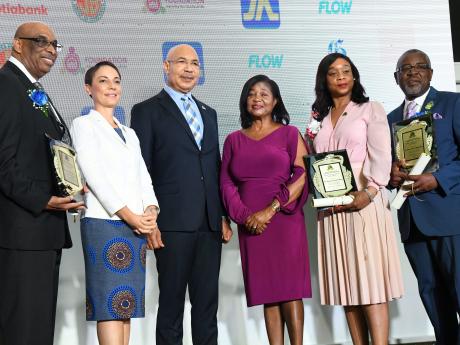 The Governor-General’s Diaspora Achievement Award was created in 2006 by then governor general, Sir Kenneth Hall.

The GG Diaspora Awards are presented to Jamaicans who have demonstrated active and outstanding service towards the development of their country of residence and Jamaica. The awards are divided into two categories; under 35 and the over 35 age categories.

Johnson, the recipient in the under 35 age category, was awarded for her extensive work in helping at risk young people and working with the police to provide mentoring and advocacy to families involved in a criminal lifestyle.

Lewis, who is the recipient in the over 35 age category, has been giving back to Jamaica for the past 20 years. She has mobilised funds and materials for the hospital and infirmary in Portland and to date, has raised more than £3 million in cash. She also formed a charity in 2007 named ‘Wheels to You’, which distributes recycled wheelchairs to disabled persons in Jamaica.

Barrett was awarded for his outstanding service in assisting youths in education and leadership development. Since 1993, he has assisted with mentoring young persons to gain academic scholarships. Over the years, he has helped over 200 Jamaicans and Afro-Caribbean students gain admission to tertiary institutions and where necessary, assisted with food and clothing.

Curtis, an awardee in the over 35 age category, has led and participated in many lobbies in Washington D.C and the White House to expose the positive contributions of Jamaica and Jamaicans. He has also advocated for the reform of issues which negatively affect the Jamaican Diaspora.

“The achievements of these recipients are some of the reason why I still believe in Jamaica and Jamaicans…. I am confident you will continue to inspire others and to pull them along with you as we are encouraged by your adaptability, your spirit of enterprise, your capacity to work hard and the values you place on education,” Allen said.