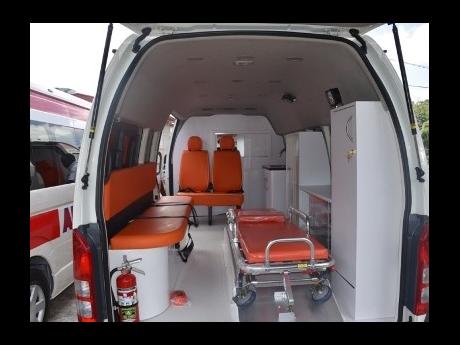 Contributed
The interior of one of the mini-buses that has been converted to an ambulance.

The Southern Regional Health Authority's (SRHA) decision to convert and retrofit three new mini-buses into ambulances, has resulted in the government saving $10.5 million.

The three ambulances are valued at more than $30 million, with each unit costing more than $10 million.

A new ambulance would cost $14 million and a delivery time of six months; however, the retrofitted ambulances were delivered in eight weeks.

The dash cam, which is a new feature, acts as a rear view mirror, a camera for the front of the vehicle as well as a monitoring camera to track the vehicle. The specifications were added following consultation with the primary users of the ambulances and are expected to give at least 10 years of good service.

“I want to recognise the region (SRHA) for the initiative in the retrofitting of these buses into ambulances and the savings that have been recognised. These ambulances are saving up to $4 million per unit and that is good because we live in a country where resources are short and therefore we have to apply our intelligent capacity to be creative. In that regard, the region (SRHA) through its stakeholder consultation partnership has demonstrated that leadership and we need more of it,” Health Minister Dr Christopher Tufton said.

In 2016, the SRHA retrofitted two new mini-buses into ambulances, resulting in savings of $7.6 million and also a shortened delivery time from six months to two months. The customisation was done without breaching or compromising the Government of Jamaica Procurement Guidelines and the international specifications for ambulances.