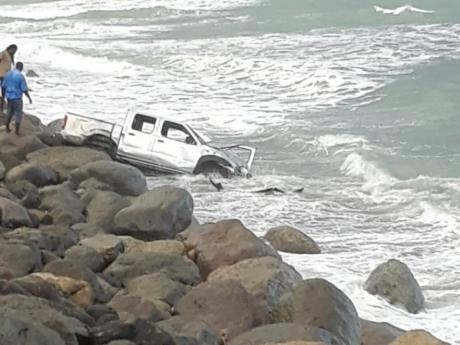 Two onlookers survey the damage to the Nissan pick-up after it ended up in the sea in Roselle, St Thomas - Contributed photo

Thirty-one-year-old Nicolas Thomas of a Kingston address was killed and eight other people treated at the Princess Margaret Hospital and released.

The impact of the crash sent one of the vehicles into the sea along the Morant Bay to White Horses main road.

It is reported that shortly after 4:30 p.m, a Toyota Corolla was travelling towards Kingston when the driver attempted to overtake a Nissan Frontier.

The Corolla hit the back of the pick-up causing both drivers to lose control of their vehicles.

The pick-up reportedly flipped several times before plunging into the sea.

The Corolla slammed into a tree.

According to the police, as many as 10 people who were travelling in the pick-up were rushed hospital where Thomas died while undergoing treatment.

The driver of the Toyota Corolla, who received minor injuries, is now in police custody.