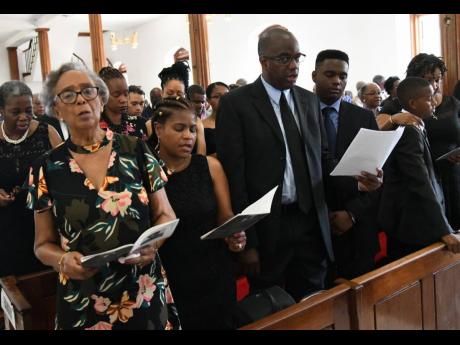 Scores of relatives, friends, associates and former colleagues gathered at the University Chapel at The University of the West Indies, Mona, in St Andrew, yesterday to pay their last respects to the Reverend Cyril Evans Bailey,

They painted a picture of a man who was instrumental in many things, including establishing a semblance of unity among churches in Jamaica.

President of the Jamaica Council of Churches, the Reverend Merlyn Hyde-Riley, described Bailey as a great son of the soil and a passionate advocate for righteousness.

“We recognise and salute him. He served the Jamaica Council of Churches in varied ways for many years and occupied the office of general secretary from 1972 to 1975, and then president from 1982 to 1984. During those times, he demonstrated steady leadership and tremendous social skills,” Hyde-Riley said.

“He possessed a calm and approachable demeanour, which aided him in becoming a positive agent in the quest for Christian unity. He was a forerunner for the establishment of a space where churches in Jamaica can speak and act as one voice. That space is known as the Jamaica Umbrella Group of Churches. He was a firm believer in the prophetic ministry of the church,” she said.

On June 25, 1980, Bailey joined the RJR family as a director on the board of Radio Jamaica Limited.

Two weeks later, he succeeded South Africa-born Jamaican author and journalist, Peter Abrahams, to become the third chairman of the board.

“It was under his leadership that RJR made its first bid for television, and RJR did get television, when it acquired the Jamaica Broadcasting Corporation, which is now TVJ. He participated in making this institution one that is authentically Jamaican. RJR’s mission statement and core values today speak of honesty, credibility, fairness, service and integrity – all words aptly used to describe former Chairman Bailey, to whom we are indebted and to whom we pay tribute,” Allen said.

Bailey also served stints as chairman of the National Leadership Prayer Breakfast Committee from 1991 to 1998 and was the longest-serving president of the Young Men’s Christian Association, having served for 17 years.

Bailey died on May 29, weeks before his 95th birthday, leaving behind his widow, Barbara, and seven children.