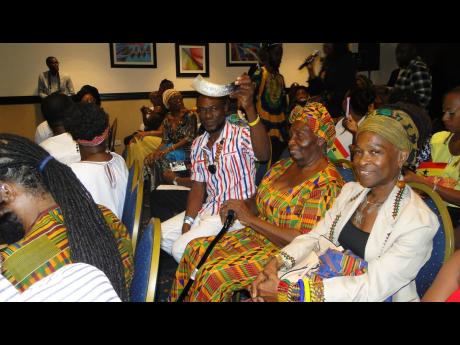 Paul Williams
Scott’s Hall Maroon Colonel Rudolph Pink holds aloft an abeng, which Ghanaian President Nana Addo Dankwa Akufo-Addo said is similar to the ones made by Africans who were brought to the West Indies. ‘Abeng’ is an Akan word meaning ‘horn’.

Ghanaian President Nana Addo Dankwa Akufo-Addo said that his two-day visit to Jamaica was aimed not only at strengthening economic, commercial and trade ties between the Caribbean and the West African country, but sought to focus on ancestral links as well.

Akufo-Addo took time out of his fast-paced weekend trip to also meet with compatriots living here at The Jamaica Pegasus hotel in St Andrew.

It was one of many stops, which included a meeting with Prime Minister Andrew Holness, a tour of Seville Great House in St Ann, and a brief wreath-laying ceremony at the Marcus Garvey monument in National Heroes Park.

After commending the president for the waiver of visas for Jamaicans travelling to Ghana, Benjamin Asamoah, president of the Ghanaian Association in Jamaica, raised concerns about the absence of a Ghanaian consulate in Kingston, the need for direct flights between West Africa and Jamaica, and the revival of Marcus Garvey’s Black Star shipping line vision or the establishment of a Black Star airline.

Akufo-Addo used the meeting to call for stronger links to be forged between Ghana and Jamaica.

“Across the world people are getting together, who are of the same stock. It is now time that we should do the same. We should work together and strengthen ourselves,” the president said, referencing Jamaica’s colonial-era plantation economy and the legacy of slavery.

Four hundred years ago, in February 1619, about 25 Africans arrived in what is now known as James Town, Virginia. That was the start of what the president said was the “most monstrous, barbaric transactions ever written in the pages of human history”, referencing the transatlantic trade in which millions of West Africans were forcibly brought to the Americas.

In light of the 400th anniversary, Ghana has billed 2019 as the Year of Return, and Akufo-Addo invited Jamaicans to participate in a series of activities to mark the milestone.

Akufo-Addo urged Jamaicans to use the symbolism of the Year of Return to forge stronger links.

The president said he had a long discussion with Prime Minister Andrew Holness on Saturday and a series of “fruitful engagements” with members of his Government.

The Ghanaian president lamented the 20-hour journey to Kingston, saying that both governments should explore the feasibility of direct flights.