Jamaica gets first Taino chief in over 500 years 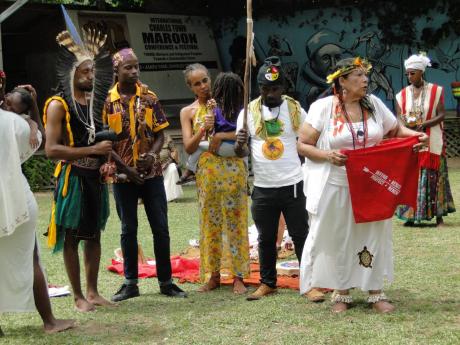 When the Europeans came to what is now known as Jamaica (Yamaye), the Tainos had established themselves in several villages all over the island. They had functional social, commercial, religious and political systems.

The cacique (also spelt kasike/cacike) was the paramount chief of the cacicazgo (chiefdom), which consisted of several villages. The cacique’s power was vast, and he was highly respected. The power that he wielded and the respect he commanded were obliterated after the Spaniards arrived.

The history books are explicit in their narratives about the total genocide of the Tainos in Jamaica. Yet, it is a fact that the Taino DNA had survived through interbreeding, and there are many Jamaicans, some of whom are academics, who have laid claim to their Taino ancestry and preserving Taino heritage.

Robert Pairman is one of the people who are active in preserving the Taino heritage in Jamaica, and recently he was enstooled in an elaborate ritualistic ceremony as kasike (cacique) of the Taino Tribe, Jamaican Hummingbird (YukayekeYamayeGuani), inside the Asafu Yard at Charles Town Maroon village in Portland.

For more than two hours, people watched as history unfolded in front of their eyes. They listened to the impassioned voice of Boriken (Puerto Rico) Taino elder Bibi Vanessa Inarunikia Pastrana as she guided the participants and informed onlookers about their Taino and Africa heritage, and the need to embrace them. It was she who handed Pairman the mayana (Jamaican Taino ceremonial axe) that was used by a Jamaican cacique.

“The feathers carry the medicine from various birds to connect the kasike’s words, thoughts and what he hears to the creator,” Pairman later said. The flamboyant symbol of authority was made by a behike (ceremonial leader and medicine man) named Brandon ‘Cotubanama Ururu’ Casul from Puerto Rico. His father Robert W. Pairman and father-in-law Ronald Bowes were also in the inner circle to witness the historic moment.

After the crowning, Robert Pairman rose as Kasike Nibonrix Kaiman, to tumultuous applause. He was joined by his wife, Kasike Liani Ronalda ‘Kaikotekina’ Pairman, and baby daughter. Pastrana then explained how people should greet and communicate with him.

Then it was time to receive other symbolic offerings which included a miniature duho (chair), a gift from the Institute of Jamaica. That duho is said to have been recovered from a Taino burial site.

“For us, its presence in the ceremony represented resurrection of the tribe with a new cacique,” Kasike Kaiman later told The Gleaner.

In his brief response, Kasike Kaiman thanked the people for their support. He said his rise to the leadership role has been ‘an interesting journey’ for him and his family. It was replete with ‘blessing after blessing’ and ‘obstacle after obstacle’, but it was an answer to the call of the guamo (conch shell), the sacred trumpet.

He called for assistance for this “big work that is bigger than me. “I am here to help the people, to serve the people … I will be here to guide, to pray, to share, to sing, to dance, to cry,” he said in closing.