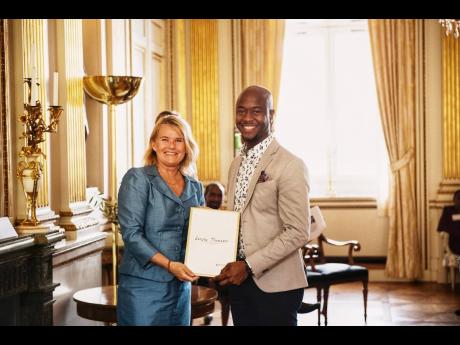 Jamaica-born Global Swede Awardee for 2019, Sanjay Thompson, is hoping to use his background in criminology to make an impact on reducing the levels of crime in the society.

Thompson, who hails from the parish of St Catherine, was awarded a scholarship to pursue a master’s degree in criminology at Malmö University, Sweden, in 2017.

He successfully completed his programme in May, and was presented with his degree on June 7.

Thompson told JIS News that his reason for pursuing criminology was to explore new initiatives and strategies he could take back to Jamaica, to assist with fighting crime.

“I was very interested to see how much I can make an impact in the field of criminology, especially as it relates to assisting the vulnerable population and coming up with crime solutions, particularly for problems that are affecting Jamaica,” he stated.

“I would love to be able to help with the crime-fighting strategies, and not just that, but help with the vulnerable population. I would like to see an improvement in rehabilitation programmes,” he added.

For his thesis, Thompson returned to Jamaica to conduct research on Jamaicans who were deported and living in Kingston, and also with the National Organization of Deported Migrants.

“For my master’s thesis, I focused on the topic ‘Between a rock and a strange place. Fear of crime and the well-being of deported migrants in Jamaica’. I decided to focus on this topic because not only am I interested in fighting crime, but also helping people affected by situations that revolve around crime, for example, deported migrants,” Thompson said.

“They (deportees) are always being victimised or being called criminals. They are stigmatised in Jamaica and we don’t think about how that may affect them, so that was what my research was on,” he added.

The former student of St Jago High School was nominated by the Malmö University for the Global Swede Award.

The award is a public recognition by the Swedish Ministry of Foreign Affairs for excellent social innovation and entrepreneurial performances in that nation.

Thompson is the first Jamaican to receive the prestigious award and was the only recipient this year from the Americas region. He was presented with his award on May 21 at Sweden’s Ministry of Foreign Affairs.

“I was humbled by the nomination from the Department of Criminology at Malmö University, and now I’m extremely grateful for this top award from Sweden’s government offices,” he said.

“I really love my country. I entered the Festival Song Competition because I am a very patriotic person and I would like to see the best for my country, in every way possible,” Thompson said.

Meanwhile, the 27-year-old said that his desire to pursue a master’s degree in criminology started before he competed in the JCDC Festival Song Competition.

He pointed out that his interest started while he pursued a ­bachelor’s degree in psychology at The University of the West Indies, Mona.

Thompson will be starting his PhD in July at Lund University in Sweden.

He noted that his main motivators are his family and friends living in Jamaica who cheer him on in his endeavours.

“My mother, Pauline Thomas Thompson, is a huge motivator. She is a vice-principal at Old Harbour High School and she always motivates me to pursue my goals,” he said.