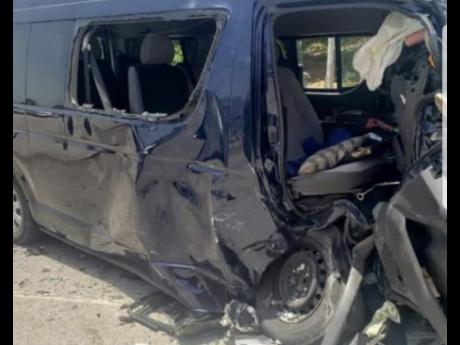 Two men, are now dead, and eighteen other persons injured, following motor vehicle crash on the Barbican main road in Hanover this morning.

Those killed have been identified as Kevaughn Sutherland of High Level Road in Sandy Bay and Everton 'Wanga' Riley, a bus driver, of a Lucea address, both in Hanover.

Fifteen other persons, including three teenagers, are among those seriously injured.

The Sandy Bay Police say the crash happened shortly after 11:40 a.m. in the vicinity of Chukka Blue Adventures Tours.

Firefighters had to cut Riley from the bus.

The two drivers  and the passengers were taken to hospital where Sutherland and Riley were pronounced dead.

One motorist complained that the pothole has been a hazard for a long time.

Since the start of the year 13 persons have been killed in nine crashes in Hanover compared with eight fatalities in seven crashes during the similar period last year.