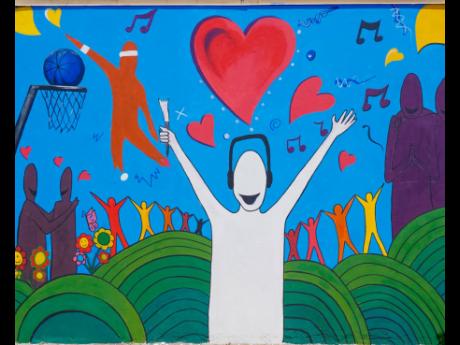 Contributed
A completed mural designed and painted by patients of the Bellevue Hospital in Kingston. They were aided by students of the Edna Manley College of the Visual and Performing Arts.

“Art can permeate the very deepest part of us, where no words exist.”

– Eileen Miller, The Girl Who Spoke with Pictures: Autism Through Art

Many artists and creatives will tell you that they are most at ease when creating something, and even more so when they are doing it recreationally. Most creatives will agree that when devising any work, there is always an element of personal truth that will provoke a reaction from an external audience. When we speak to muralists – this is even more evident as they tend to not only put sweat and energy into the work, but also elements of their personality and their story.

Individuals were recently given the opportunity to see the stories of a few persons that many Jamaicans often disregard – mental health patients, specifically patients at the Bellevue Hospital on Windward Road in Kingston.

Pepsi-Cola Jamaica, through its corporate social responsibility campaign, ‘Jamaica I Can’, sought to empower these persons by way of channelling their creative energy, though the institution’s art therapy programme, into the development of artwork which became the murals they were assisted in creating by students from the Edna Manley College of the Visual and Performing Arts (EMCVPA).

The group of more than 15 patients painted two of the three murals done at the institution, guided by the students of Edna Manley. This was the culmination of over two months of careful planning and collaboration between teams from EMCVPA, Pepsi and the management of the hospital.

This undertaking could be deemed as groundbreaking, especially as chief executive officer at the hospital, Latoya McFarlane, explained that this project was the first for the institution where the patients were creatively and physically engaged.

“We had a number of patients who are a part of our art therapy programme who have contributed to the development of the artwork for the mural. From their own experiences, the entire group was then asked to put their thoughts into art, whether it was a drawing, painting, etc,” McFarlane said.

“The completed pieces were compiled and under the supervision of Mr Watson, and the students from EMCVPA combined elements from each individual’s work. They presented final collages both to us leadership, as well as the patients who were excited to see that their voices were being heard and respected,” she added.

The CEO stated that the level of inclusion and respect that was given to her clients, as she affectionately refers to them, is something that was novel both to her and to them, and sparked much enthusiasm from the undertaking.

Remarking that the exercise, pre- and post-mural, was a well-needed breath of fresh air, she went on to add that the process of collaboration included focus groups with patients and students, as well as open and honest discussions with various organisations about the state of mental health in Jamaica. A related concern was about what needs to be done to expel the stigmatisation of people who are brave enough to seek the help they need.

“There are always groups that want to come in and help, and in our more than 150 years of operation, we have never refused any person or group that wants to positively engage our clients. But at the same time, the way they choose to do this is by way of a tour or the donation of supplies, and even volunteering,” McFarlane said.

“These are always appreciated and encouraged, but this time around, the bar has been raised. Our clients were engaged from the first meeting to the last brushstroke. The team from the Edna Manley College, while they combined the works that our clients did, they ensured that in sketching the images on the walls looked exactly as the clients drew them, and ensured that the colours were what the clients wanted, and they were right there teaching and showing them how to paint it. This was heartwarming to not only see but experience,” she added.

With the focus of the campaign being the upliftment and empowerment of all Jamaicans, it was befitting that the brand sought to not only engage, but also include the patients. According to Pepsi Brand Manager Elizabeth Allen, the practice of excluding the beneficiaries of projects from the process, often done by corporate Jamaica, is one that needs to be eliminated.

“We, from the onset of our campaign, decided that in addition to affecting the perception of mental health, we wanted to include the patients in any and all aspects possible for this project. We took on this project as a statement to all who even wonder about it. We want to demolish stigma and highlight the Jamaican culture of love and togetherness which spans all generations, which will, in fact, heal our own minds and further our communities,” Allen concluded.