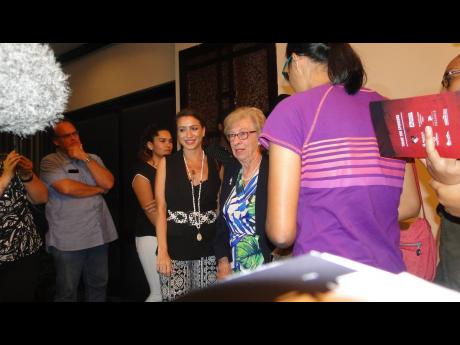 Holocaust survivor Eva Schloss is surrounded by people who are eager for a photo opportunity with her inside The Jamaica Pegasus hotel on April 2. PHOTO BY Paul H. Williams

Towards the end of 1943, activities in the labour barracks were winding down. But people all around were dying of hypothermia, diseases and starvation. There were rumours that the Russians were advancing, tension filled the air (even among the S guards), and the prisoners’ minds were conflicted by hope and despair.

The daily control by Kappos and S guards had abated, and it was Minni, the wife of the skin specialist, who was keeping things under control and boosting the morale of the prisoners. Not much food was available, so Eva Schloss (nee Geiringer) and her mother (whom she called Mutti) could only fantasise about it.

One day in January 1945, at the height of a brutal winter, an SS officer ordered those who could to leave the building. However, Mutti was too weak to move. In her book Eva’s Story, Schloss writes, “ Mutti’s emaciated condition had left her in a desperately weak state, but she was determined to stay with me from now on …. I half-dragged her, half-carried out of the door.”

In the night, many people died. Minni had to drag the dead from their bunks to take them outside. The alarms and rushing in and out continued for three days. At the end of the third day, Eva refused to move with her mom. They instead fell into a deep sleep.

When they woke up the following day, everything was still, and the barracks where the prisoners stayed seemed almost empty. When Eva went to investigate they found that all the SS guards and dog, the Kappos, the hospital patients, Minni and the nursing staff were all gone.

Dead bodies were strewn all over the place; only about 200 people out of tens of thousands were still alive. “Eighty per cent of these were too ill to move at all and laying waiting for death. The rest of us, a tiny contingent of living skin and bones, hung on with rising hope,” Schloss says.

Not sure of when the Russians would turn up, the inmates began to organise things among themselves. A polish political prisoner named Olga took charge and recruited Eva and a few others to assist her. They covered themselves in blankets and went to find food in the kitchen.

There, they found hundreds of loaves of bread. They ate ravenously before taking back some for those too ill to move. Still hungry, they were too weak to go back for more. Not being able to take care of themselves, they did not know what was going to happen to themselves, and people kept dying.

She recalls, “It was the worst task I have ever had to perform in my whole life. I carried out the dead. Some were friends with whom I had talked about liberation. Many were so diseased and stinking that it took all my courage to touch them … . I saw more people die in the next few days than I had seen in my whole time at Birkenau.”

As the gunfire got nearer, hunger was consuming their already weakened bodies, and one morning when they went back to raid the kitchen, Eva saw a hole in the fence that separated the two camps. She took the chance, mindful of the possibility of being electrocuted. Two other women followed her. The place was completely bereft of any human or animal presence.

But, much to their abundance of joy, they found provision barracks containing clothing and shoes, linen and food – “food beyond our wildest dreams”. They brought back items for the infirmed, and for the next few days, they returned many times to find everything they needed.

Water was in great demands, but it was all frozen. Snow was melted, and the ice of a frozen pond was cracked with axes. That was how they coped for days, but there was also the need for heat/fire/warmth.

In their effort to find such, they saw a wooden house and decided to go check it out. As they were about to leave, a woman screamed saying there was a bear at the gate. Cautiously, they went to investigate. The figure turned out to be a man dressed in bearskin. He and Eva stared at each other briefly before they embraced.

“Our liberator stood at the entrance to the camp, alone and strong. With outstretched arms I ran to him and hugged against him … and although our languages were not the same, what I said to him and what he said to me was understood by us both. The Russians had come,” Schloss recalls.