Take back our country! - Bishop Bell leads march against social ills on the island 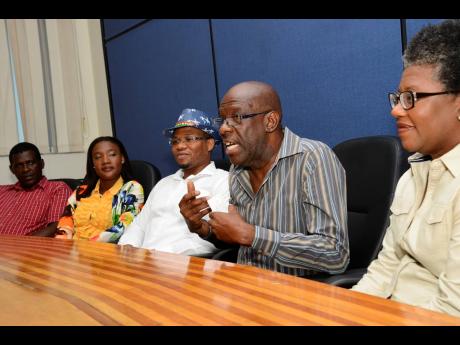 “It has begun!” As various atrocities, including crime and violence, lawlessness and scant regard for morality, continue to negatively impact the island, Bishop Winton Bell of Time Out for Jesus Worldwide Ministries is calling on Jamaicans to change their ways and return to what was once a peaceful and law-abiding nation.

Bell, whose immediate church family has been recovering from recent attacks on members by criminal elements, has initiated a series of marches to highlight some of these atrocities and, by extension, change the negative cycle currently affecting individuals in the society.

“There have been many reports in the news media regarding rape and abduction by taxi men, and persons are of the view that travelling via public transportation is unsafe. We want to highlight these issues as well, as we are demonstrating against the reckless use of our roadways, not just by taxi operators, but road users overall,” Bell said.

The marches, he said, will also bring to the fore the fact that many persons who are driving are not qualified to do so, and as such, the mayhem continues unabated on our roadways.

“We have been given the directives from God, and He wants to make it visible in the public domain that these things must not continue. God wants to fix this country, and we have to be strong despite the possible repercussions to take back our country from the criminal elements,” Bell said.

According to Bell, just four months ago, a member of his church had to jump from a moving taxi to avoid being raped as she made her way from Barbican to Half-Way Tree.

In another incident that happened one month ago, a church member was coming from school when the route taxi made its stop in Half-Way Tree. As the passengers alighted from the vehicle, attempts were made by a ‘loader man’ to detain the student in the vehicle. “She had to retaliate violently to escape or she would have been another victim,” Bell said.

God, he said, has used other people in the organisation to confirm the need to have the marches, and notwithstanding, he has been speaking out against the issues on his radio programme ‘Pastor Bello Live!’ on Roots 96.1 FM.

The 250-member-strong organisation staged a peaceful march on June 10 from the church’s location on Hagley Park Road to Jamaica House and is set to have a similar march on Monday, June 24, on the same route.

“We feel that it is an overdue march as nothing is really being done about the issues. We need to keep the momentum going. No longer do Jamaicans care about their country, and we believe that with Yahweh on our side, we can achieve the objectives He has given us,” Bell said. The march is scheduled to take place between 1:30 p.m. and 4:00 p.m.