Elderly among scores of mourners who traveled for hours, brave searing heat for #SeagaFarewell 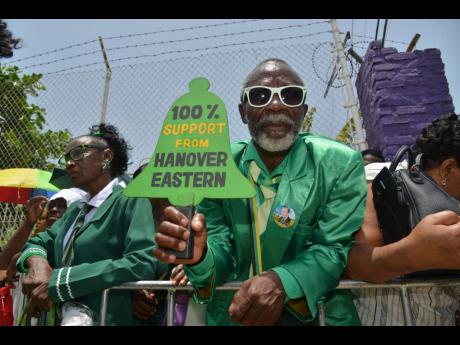 Hundreds of mourners, some of whom travelled for hours from rural parishes, braved the searing midday heat to pay their last respects to former Prime Minister Edward Seaga.

Among them was Herbert Downes, an elderly man from Hanover, who did not want to miss the occasion.

For him, Seaga was “a stalwart of a leader”.

He remembered Seaga for his strength as prime minister after hurricane Gilbert devastated the island in 1988.

"That man will never be forgotten. He brought the country back from Gilbert," said Downes.

Another mourner, Denise Watts, said she left Trelawny at 4:30a.m. to ensure she would get a suitable vantage point.

"Even if I lived in Africa I would be here today. It's a historic day and I had to come," she said.

Both complained, however, that not enough arrangements were made for elderly persons.

They lamented, too, that the tent set up outside was too small for the large crowd.

One man, 78-year-old Joseph Warren, was overcome by the heat and had to be assisted to the comfort of his car by another mourner.

"This ya heat wicked and the tent can’t even hold 50 people. But is a risk me did want fe tek," Warren told The Gleaner.

The official programme for the funeral also turned out to be very popular among mourners.

"I needed this. Me did have to get one because it's a keepsake. Years from now I want to show my great grand this programme and tell about the man Edward Phillip George Seaga," said Lucille Morgan.