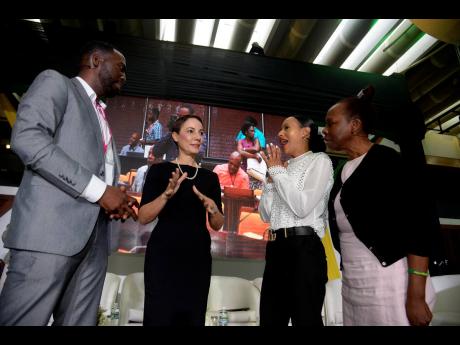 Jamaica has achieved or exceeded just over a third of its targets under the Vision 2030 Development Plan, says Dr Wayne Henry, director general of the Planning Institute of Jamaica (PIOJ). In another 34 per cent of cases, the country improved its baseline performance in key economic and social developmental areas, he said.

Often referred to as the Vision 2030 Plan, the document is a road map that outlines how the country will achieve First-World status with 11 years to go.

Speaking to expatriates at the opening session of the Eighth Biennial Jamaica Diaspora Conference in downtown Kingston on June 17, Henry further disclosed that the 34 per cent of targets that have not been attained are either the same or worse than they were before.

The PIOJ director general pointed out that since the launch of the plan in 2009, the targets have been measured in three-year cycles under a medium-term framework. The country is now in its fourth cycle, 2018-2021.

The targets that exceeded included the annual inflation rate; foreign exchange earnings from tourism; grade four literacy rates and the lowering of the unemployment rate, which the Statistical Institute of Jamaica indicated in its January report was eight per cent.

Attendance at secondary schools; the poverty head-count ratio; rural poverty; environmental performance index; and court case backlogs are some of the areas that remain the same or have worsened, he indicated.

Henry said that by strengthening partnerships with its diaspora, Jamaica can enrich its contribution to the country’s development goals.

His views are in line with a study unveiled by the Caribbean Policy Research Institute presented at the last Diaspora Conference, which showed that expats contribute a minimum of 23 per cent to the gross domestic product through several sectors, including investments and tourism, but has the potential to contribute at least 35 per cent.

Beyond remittances, which provide critical support to Jamaicans locally, and shores up the country’s foreign currency reserve, Henry noted that there is further scope to engender economic development through investment in real estate, the capital market, and venture capital.

He also noted that there was room for development through knowledge transfer.

“Many Jamaicans who migrated have distinguished themselves in their adopted homeland in diverse areas such as business, medicine, information technology and law. Sharing their expertise would advance the island’s knowledge capacity in a wide range of areas,” he maintained, pointing out that the micro, small and medium enterprise sector, in particular, could benefit from an infusion of expertise from the diaspora.

Responding to the points raised at the opening session, Leesa Kow, deputy managing director at JN Bank, said that the improving economic conditions should inspire confidence among Jamaicans overseas to further invest in the country. However, she said beyond the economic, there is more to be gained from the social input of the diaspora to further the Vision 2030 agenda.

“There is an unexploited value that we can tap into among those in our traditional diaspora markets, which goes beyond remittances and donations,” Kow, who is also a former president of the Jamaica Remitters Association, affirmed.

“There is power in the simple networks we build, through our relationships with Jamaicans overseas, which are vital to position Jamaica in the global landscape and strengthen its brand,” she said.